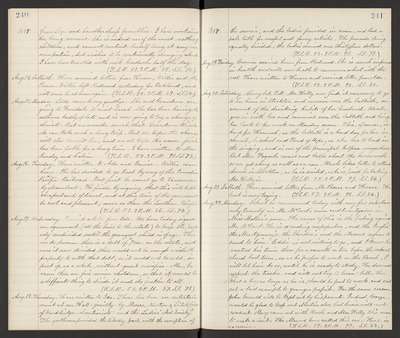 1887 from Lou and handkerchiefs from Alice. I have mentioned her being nervous. She is indeed one of the most restless of children, and cannot content herself long at any one occupation, but wishes to be continually changing about. I have been troubled with sick headache half the day. (T.S.R. 51. 2 P.M. 85. S.S. 72.)

Aug. 15. Monday. Lilla came to say goodbye. She and Grandma are going to Fundale to visit Sarah. She has been having the asthma badly of late and is now going to try a change of climate. But we wonder much that Grandma thinks she can take such a long trip. But she hopes the change will also benefit her, and we all hope the same, for she has been feeble for a long time. I have written to Mrs. Sandoz and Calvin. (T.S.R. 50. 2 P.M. 91. S.S. 73.)

Aug. 16. Tuesday. Have written to Ada and Eunice. Willie came home. He has decided to go East by way of the Canadian Pacific Railroad. But first he must go to Vancouver by steamboat. He finds, by inquiry, that this will be the cheapest route of travel, and at their time of the year must be cool and pleasant, more so than the Southern Pacific. (T.S.R. 51. 2 P.M. 86. S.S. 74.)

Aug. 17. Wednesday. Received a letter from Ida. We have today signed an agreement (all the heirs to the estate) to keep the property undivided until the youngest child is of age. This we do, because there is a debt of $7000. on the estate, and were it now divided, there would not be enough available property to settle that debt, as it could not be sold, in part of as a whole, without great sacrifice. Also, because there are five minor children, so that it would be a difficult thing to divide it and do justice to all. (T.S.R. 51. 2 P.M. 87. S.S. 71.)

Aug. 18. Thursday. Have written to Ida. There has been an entertainment at our Hall - jointly by Messrs. Newton & Litchfield of Woodbridge - elocutionists - and the Ladies' Aid Society. The gentlemen provided the literary part, with the exception of

Aug. 19. Friday Eunice arrived home from Redwood. She is much improved in health and will now be able to commence school with the rest. Have written to Horace and received letter from Ada. (T.S.R. 52. 2 P.M. 92. S.S. 80.

Aug. 20. Saturday. Every Sat. P.M. Mrs. Kelly now finds it necessary to go to her home in Stockton and remain over the Sabbath, on account of the drinking habits of her husband. Uncle goes in with her and remains over the Sabbath and brings her back to her work on Monday morn. This, of course, is hard for Hannah, as the Sabbath is a hard day for her in church, S. school and Band of Hope, as she has to lead in the singing, and is one of the principal helpers everywhere. But Mr. Fogarle comes and helps about the house work so we get along as well as we can. Uncle likes better to attend church in Stockton, so he is suited, as he is paid for taking Mrs. Kelly in. (T.S.R. 55. 2 P.M. 97. S.S. 84.)

Aug. 22. Monday. School re-commenced today with very few scholars. only twenty in Mr. McCourt's room and twentyseven in Miss Mallon's room. The cause of this is the feeling against Mr. McCourt. He is exceeding unpopular, and the Inglis' the Montgomery's, the Sherden's and the Masons refuse to send to him. Eddie is not willing to go, and I know he wasted his time there for a month or two before the school closed last term, so as he prefers to work on the Ranch, I will let him do so, until he is ready to study. He does not respect the teacher and will not try to learn better than, that a boy as large as he is, should be put to work, and not set a bad example to younger pupils. For the same reason, John Gecould will be kept out by his parents. Indeed, George would be glad to keep out [?] also, but Susie will not consent. Mary came out with Uncle and Mrs. Kelly this morn to make a visit. The Masons have called this eve. Heat is excessive. (T.S.R. 59. 2 P.M. 99. S.S. 82.)