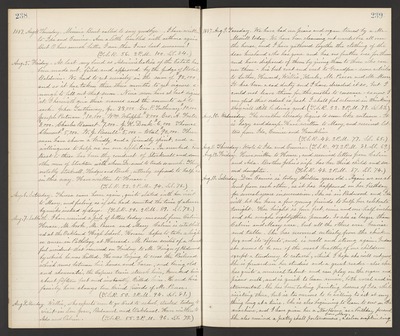 Aug. 7. Sabbath. I have received a pile of letters today - one each from Calvin, Horace, Mr. Cooke, Mr. Pascoe and Mary Calvin is established at the Oakland High School. Horace hopes to take a higher course in Pathology at Harvard. Mr. Pascoe writes of a dreadful accident that occurred on Friday to Mr. Finger of Redwood by which he was killed. He was trying to cross the Railroad which runs between his house and barn, and being old and rheumatic, the Express train struck him, knocked him about fifteen feet and instantly killed him. He and his family have always been kind friends of Mr. Pascoe. (T.S.R. 50. 2 P.M. 94. S.S. 81.)

1887. Aug. 9. Tuesday. We have had our piano and organ tuned by a Mr. Merrill today. We have been cleaning out wardrobes all over the house, and I have gathered together the clothing of the dear husband who has gone and has no further use for them and have disposed of them by giving them to those who can use them - his best coat and vest to Grandpa - some articles to Luther, Howard, Willie, Uncle, Mr. Pascoe and Mr. Moore. It has been a sad duty and I have dreaded it so, but I could not leave them for the moths to consume - so now I am glad that ordeal is past. I shall feel relieved in thinking they will still be doing good. (T.S.R. 52. 2 P.M. 79. S.S. 63.)

Aug. 13. Saturday. Dear Eunice is today thirteen years old. Again we are absent from each other, as it has happened on her birthday for several years in succession. She is in Redwood and Ida will let her have a few young friends to help her celebrate tonight. Her height is four feet, nine and one-half inches and she weighs eightythree pounds. So she is larger than Calvin and Mary were, but all the others were heavier and taller. She has recovered entirely from the chicken pox and its effects, and is well and strong again. Indeed she seems to be one of the most healthy of our children except a tendency to catarrk, which I hope she will outgrow. She is forward in her studies and a great reader - also she has quite a musical talent and can play on the organ and piano well, and is quick to learn music, both vocal and instrumental. She has been taking painting lessons of Ida while visiting there, but is too nervous to be willing to sit at anything long at a time. She is also beginning to learn to sew on the machine, and I have given her a "New Home" as a birthday present. She also received a pretty shell portemonnaie from Mary, a silver napkin sing