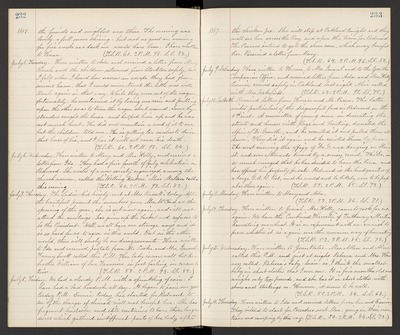 July 5. Tuesday. Have written to Ada and received a letter from Mary. Uncle and the children returned from Stockton safely, but I felt when I heard how narrow an escape they had from serious harm, that I could never trust the little ones with Uncle again in that way. While they were out of the wagon, fortunately, he overturned it by losing one rein and pulling upon the other so as to turn the wagon short around. Some by- standers caught the horse and helped him up and he was not much hurt. He did not mention a word of it to me but the children told me. He is getting too careless to drive that horse of his, and I fear it will yet cause his death. (T.S.R. 60. 2 P.M. 98. S.S. 84.)

July 6. Wednesday. Have written to Mary and Mrs. Kelly, and received a letter from Ida. They had a fine fourth of July celebration in Redwood. She writes of a new society organized among the church women, called the "Willing Workers". Miss. Mallon called this evening. (T.S.R. 60. 2 P.M. 93. S.S. 82.)

July 7. Thursday. The Ladies Aid Society met at Mrs. Russell's today. After the beautiful present the members gave Mrs. McCloud at the opening of the year, she is out now again, and will not attend the meetings - has given up the basket and refuses to be the President. Well, we all have our strange ways and it is so hard for us to agree in this world. But in the other world. there will surely be no disagreements. Have written to Ida and received postals from Mr. Cooke and Mrs. Immel. Fanny Swett called this P.M. Her baby is now well but her brother William of San Francisco is fast failing in consumption. (T.S.R. 58. 2 P.M. 93. S.S. 82.)

July 8. Friday. We had a cloudy P.M. with a sprinkling of rain. I have had a bad headache all day. It began to pain me yesterday P.M. Eunice today has started for Redwood to see if the change of climate will not benefit her. She has frequent headaches and still continues to have those large sores which gathered in different parts of her body after

July 10. Sabbath. Received letters from Horace and Mr. Pascoe. The latter writes particulars of the disgraceful fuss in Redwood on the 4th inst. A committee of young men in decorating the streets and houses with flags and bunting, decorated the office of Dr. Gamble, and he resented it and pulled them all down. They did it again and he resisted them by force. The next morning the effigy of Dr. G. was hanging on Main St. and was afterwards burned by a noisy crowd. The Dr. is so much enraged that he has decided to leave the town and has offered his property for sale. Redwood is the headquarters of a large G.A.R. Post, and he would not be likely ever to be popular there again. (T.S.R. 55. 2 P.M. 85. S.S. 72.)

July 12. Tuesday. Have written to Josiah. Mrs. Kelly came to cook for us again. We have the "Combined Havester" of Tretheway & Martin harvesting our wheat. It is an experiment with us - we wish to prove whether it is a gain over the common way of harvesting. (T.S.R. 52. 2 P.M. 85. S.S. 72.)

July 13. Wednesday. Have written to Joan Bates. Mrs. Allen and Alice called this P.M. and just at night Rebecca and Mrs. Harvey called. Rebecca's baby - Susie - is, I think the smallest baby in short clothes that I ever saw. It is five months old and weighs only ten pounds, and she has it in short clothes, with shoes and stockings on. However, it seems to be well. (T.S.R. 50. 2 P.M. 84. S.S. 68.)