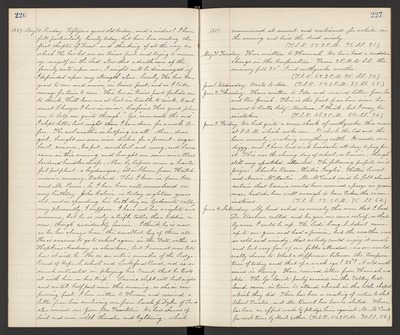 1887. May 30. Monday. Fiftyone years old today, and a widow! I have felt particularly lonely today, but have been reading the first chapter of Deut. and thinking of all the way in which He has led me in times past, and trying to encourage myself in the Lord. Now that a double care of the family rests upon me, I might well be discouraged, if I depended upon my strength alone. Surely He has been good to me and mine in times past, and so I take courage for time to come. "His love in times past forbids me to think, He'll leave me at last in trouble to sink, Each sweet Ebenezer I have in review, Confirms His good pleasure to help me quite through." Yes, "even unto the end." I slept better last night than I have done for a week before. The cool weather is helping us all. Alice, dear girl, brought me some nice dishes for a present - sugar-bowl, creamer, tea pot, mush bowl and mug, and Susie came in this evening and brought me some nice black bordered handkerchiefs. Also, by Express came a beautiful potplant - a hydrangea, - all in bloom, from Hutchinson's nursery, Oakland. This I know is from Ida and Mr. Pascoe. So I have been well remembered on my birthday. John Calvin is today eighteen years old, and is spending his birthday in Yo-Semite valley. very pleasantly, I suppose. I have not his weights and measure, but he is only a trifle taller than Eddie is now, though considerably heavier. I think he is now, as he has always been , the smallest boy of them all. He is anxious to go to school again in the Fall, either at Hopkins Academy or elsewhere, but I cannot now tell how it will be. He is an active member of the Lodge, Band of Hope, S. school and Lockeford Band, and is so much interested in playing his Cornet, that he took it with him on his trip. Eunice slept well last night and until half past nine this morning, so she is improving fast. I have written to Horace and received a letter from him enclosing one from Sarah J. Dyke of Texas also received one from Bro. Franklin. We had showers of hail and rain with thunder and lightning, which

June 3. Friday. We had quite a severe shock of earthquake this morn at 3 A.M. which woke me. It shook the bed and the house severely, making everything rattle. It made me dizzy, and I have had sick headache all day to pay for it. This was the closing day of school, so Eunice, though still very speckled, attended. The following pupils rec'd prizes; - Charlie Bacon, Katie Inglis, Hattie Covert and Annie McMartin. Mr. McCourt said he felt almost certain that Eunice would have received a prize in grammar, had she been well enough to have taken the examinations. (T.S.R. 52. 2 P.M. 75. S.S. 64.)

June 4. Saturday. My head ached so severely this morn that I had Dr. Barbour called and he gave me some relief, so that by noon I could be up. The Lodi Cong. S. School came up to our grove and had a picnic, but the weather was so cold and windy, that nobody could enjoy it much and but very few of our folks attended - no one would really choose to. What a difference between the temperature of today and that of a week ago! 32-! A cold north wind is blowing. Have received letters from Hannah and Ada. The Yo-Semite party arrived in the valley last Sund. morn. in time to attend church in the little chapel which they did. There has been a meeting of voters to elect School Trustee, and Mr. Bruml has been re-elected. There has been an effort made to pleedge him against Mr. McCourt for next term by Mont. & others. (T.S.R. 50. 2 P.M. 70. S.S. 54.)