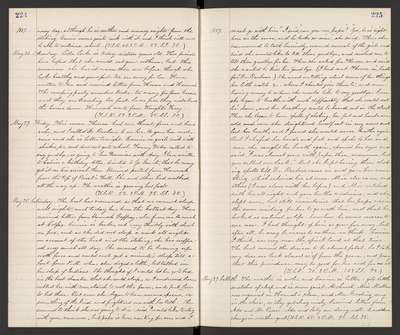 May 26. Thursday. Lilla Locke is today sixteen years old. Her friends have hoped that she would out grow asthma, but this summer she has it worse than ever before though she looks healthy and grows fast. We are sorry for her. Have written to Ida and received letters from Horace and Hannah. The camping party members twelve - too many for four horses, and they are traveling too fast. So we fear they will break the horses down. Hannah wrote from Knight's Ferry. (T.S.R. 52. 2 P.M. 85. S.S. 70.)

May 27. Friday. This morn Theresa had sore throat, fever and headache, and I called Dr. Barbour to see her. He gave her medicine and she is better tonight. Eunice is quite sick with chicken pox and does not go to school. Fanny Weber called to say goodbye, - is going to San Francisco with Amy. I have written to Calvin a birthday letter, directed to Yo Semite, that he may get it on his arrival there. Received postal from Hannah from the top of Priest's Hill. She and others had walked all the way up. The weather is growing hot fast. (T.S.R. 52 2. P.M. 95. S.S. 80.)

May 28. Saturday. The heat has increased so that we cannot sleep well nights, and today has been the hottest day. Have received letters from Hannah Geffroy, also from our Hannah at Colfox. Eunice is broken and very thickly with chicken pox, and as she did not sleep a wink all night on account of the heat and the itching, she has suffered very much all day. She seemed to be burning up with fever and could not get a minute's sleep till about four P.M. where she dozed a little, but talked in her sleep of Indians. She thought if I would let her go to bed in the best chamber that she could sleep, so I undressed her, rubbed her with cornstarch to cool the fever, and put her to bed there. But soon she began to have nervous spasms, or something of the kind and frightened me with her talk. She seemed to think she was going to die - said, "I would like to stay with you, mamma, but papa is here waiting for me, and I

1887. must go with him." I said, "can you see papa?" "yes, he is right here in the room, and he tooks so nice", she said. Then she commenced to talk hurriedly, named several of the girls and said she would like to tell them goodbye, and wished me to tell them goodbye for her. Then she asked for Theresa and said she wanted to kiss her goodbye. (I had sent Theresa in haste for Dr. Barbour.) She went on telling about some of her things her little watch, &.c. whom I should give them to, and mentioning many to whom she would like to say goodbye. Soon she began to breathe with such difficulty that she could not lie down, and her breathing could be heard out in the street. Then she began to have spells of choking, her feet and hands were cold, and once she straightened herself out in my arms and lost her breath, and I feared she would never breathe again. But I chafed her hands and feet and spoke to her and soon she caught her breath again. opened her eyes and said, "I was almost gone with papa, then, mamma, but you called me back." But she kept having those choking spells till Dr. Barbour came in and gave her some thing which relieved her at once. Alice also came and others (I was alone with her before) and Alice watched with her all night and gave her the medicine, and she slept some, but still maintains that her papa was in the room waiting for her to go with him, and that he looked as natural as life. Somehow he seems nearer to me now. I had thought of him as gone far away, but after all, he may be nearer to us than we think. Eunice I think, was very near the spirit land at that time. The heat caused the disease to be almost fatal. So I take my dear one back almost as if from the grave, and pray that this providence may be good for her and for us all. (T.S.R. 70. 2 P.M. 102. S.S. 92.)

May 29. Sabbath. The weather is cooler and Eunice is better - gets little snatches of sleep and is more quiet. At church, Miss Mallon was organist in Hannah's place, and Mrs. Gording sung in the choir, so they get along nicely. Received letters from Ada and Mr. Pascoe. Ada and baby are doing well. A sudden change in weather - good. (T.S.R. 65. 2 P.M. 91. S.S. 75.