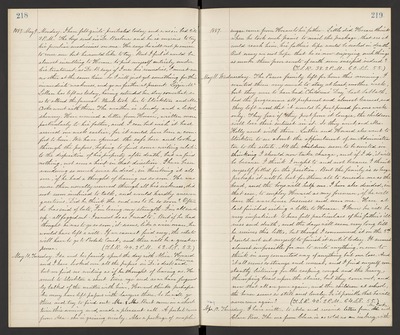 1887. May 9. Monday. I have felt quite prostrated today and was in bed till 3 P.M. The boys sent in Dr. Barbour and he is anxious to try his peculiar medicines on me. He says he will not promise to cure me but he would like to try. But I feel it would be almost insulting to Horace to put myself entirely under his treatment, as Dr. B. says if I use his remedies, I must use no other at the same time. So I will just get something for this immediate weakness, and go no farther at present. Lizzie McLellan has left us today, having extended her stay somewhat, so as to attend the funeral. Uncle took her to Stockton and Mr. Cooke went with them. The weather is cloudy and a little showery. Have received a letter from Horace, written more particularly to his father, and I can but wish it had arrived one week earlier, for it would have been a comfort to him. We have opened the safe here and looked through the papers, hoping to find some writing relative to the disposition of his property after death, but we find nothing, not even a hint in that direction. I have been wondering so much since he died, in thinking it all over, if he had a thought of leaving us so soon. He was more than usually reserved through all his sickness, did not seem inclined to talk, and would hardly answer questions. Did he think the end was to be so soon? Often he has said of late, "I'm losing my strength - I'm all used up - all fagged out - I cannot do as I used to". But if he had thought he was to go so soon, it seems, like a wise man, he would have left a will. If we cannot find any, the estate will have to go to Probate Court, and there will be a great expenses. (T.S.R. 44. 2 P.M. 62. S.S. 53.)

May 10. Tuesday. Ida and her family spent the day with Alice. Howard and I have looked over all the papers in Dr.'s desk and drawers but we find no writing as if he thought of leaving us. He went to Stockton a short time ago and as we have frequently talked of the matter with him, Howard thinks perhaps he may have left papers with lawyers there. So he will go there and try to find out. Mr. & Mrs. Burt came in a short time this evening and made a pleasant call. A postal came from Ada - she is gaining nicely. Also a package of maple

1887. sugar came from Horace to his father. Little did Horace think when he took such pains to mail the package, that ere it could reach him, his father's life would be sealed in death. But may we not hope that he is now enjoying such "things" as make these poor sweets of earth seem insipid indeed? (T.S.R. 38. 2 P.M. 60. S.S. 55.)

May 11. Wednesday. The Pascoe family left for home this morning. I wanted them very much to stay at least another week, but they were to have had "Childrens' Day" last Sabbath, had the programme all prepared and almost learned, and they left word that it would be postponed for one week only. They fear if they postpone it longer, the children will lose their interest in it. So they went, and Mrs. Kelly went with them. Luther and Howard also went to Stockton to see about the appointment of an Administrator to the estate. All the children seem to be united in thinking I should now take charge, and if I do, it will be because I think I ought to and not because I think myself fitted for the position. But the family is so large perhaps it will be best for them all to consider me as the head, and the boys will help me. I have also decided, in that case, to employ Howard as my foreman, if he will leave the warehouse business and serve me. Have at last finished writing a letter to Horace. I know he will be very impatient to hear full particulars of his father's illness and death, and the days will seem very long till he receives this letter, but though I commenced it on the 5th I could not set myself to finish it until today. It seemed almost impossible for me to write anything, or even to think in any connected way of anything but our loss. And it all seems so strange and unreal, and I find myself constantly listening for the rasping cough and the heavy, thumping tread upon the stairs, but they come not, and now that all are gone again, and the children at school, the house seems so still and lonely. Is it possible that he will never come again? (T.S.R. 40. 2 P.M. 64. S.S. 55.)

Apr. 12. Thursday. I have written to Ada and received letters from Mr. Cooke and Clara Ross. The one from Clara is a cold as an iceburg, with