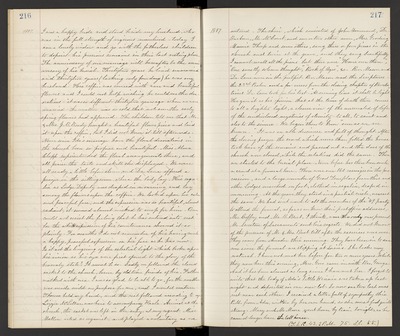 1887. I was a happy bride and stood beside my husband, who was in the full strength of vigorous manhood - today I am a lonely widow and go with the fatherless children to deposit his precious remains in their last resting place. The anniversary of our marriage will hereafter be the anniversary of his burial. Thirtytwo years he lived unmarried and thirtytwo years (lacking only four days) he was my husband. His coffin was covered with rare and beautiful flowers and I could not help wishing he could see the decorations - it was so different thirtytwo years ago when are were married - the weather was so cold that not even the early spring flowers had appeared. The children tell me that Mr. & Ms. J. B. Boody brought a beautiful flower piece and laid it upon the coffin, but I did not know it till afterwards. Never since Ida's mariage have the floral decorations in the church been so profuse and beautiful. Miss Alma Clapp superintended the floral arrangements there, and all praise the taste and skill she displayed. We were all ready a little before eleven, and Dr. Lane offered a prayer in the sittingroom, where the body lay. His regalia as Lodge Deputy was cleaped in mourning and lay among the flowers upon the coffin. We looked upon his calm and peaceful face, and the expression was so beautiful, almost radiant, it seemed almost wicked to weep for him. One could not resist the feeling that he was "entered into rest" for the whole expression of his countenance showed it so plainly. For months I do not remember of his having such a happy, peaceful expression on his face as he has now. Is it not the lingering of the celestial light which broke upon his vision as his eyes were first opened to the glory of the heavenly state? It must be so. Sadly we followed the closed casket to the church, borne by oldtime friends of his. Father walked with me. I was so glad to be able to go, for the weather was made mild on purpose for me, and I would venture. Theresa held my hand, and the rest followed according to age. Lizzie McLellan was here to accompany Uncle. Arrived at the church, the casket was left in the entry, at my request Miss Mallon acted as organist, and played a voluntary as we

1887. entered. The choir, which consisted of John Hammond, Dr. Barbour, Mr. McCourt, and one or two other men, Mrs. Gooding Mamie Thorp and some others, sang three or four pieces in the church and twice at the grave, and they sang beautifully. I cannot recall all the pieces but there were "Home over there", "One sweetly solemn thought", "Rock of Ages", &.c. Rev. Mason and Dr. Lane were in the pulpit. Rev. Mason read the Scriptures - the 23rd Psalm and a few verses from the closing chapters of Revelations. Dr. Lane took for his text - "At evening time it shall be light". He gave it as his opinion that at the time of death there comes to all a brighter light, a clearer view of the unrevealed of life - of the undisclosed mysteries of eternity - to all, to saint and also to the sinner. We begen then to know "even as we are known." It was an able discourse and full of thought. After the closing prayer the crowd which more than filled the house took leave of the remains and passed out and the doors of the church were closed, while the relatives did the same. Then we started to the burial-place. Never before has there been such a crowd as a funeral here. There were over 160 carriages in the procession, and a large number of Good Templars from this and other Lodges marched on foot, clothed in regalia, draped in mourning. At the grave, they stood in a partial circle, nearest the same. We had sent word to all the members of the 49 party to attend the funeral, as far as we know their post office addresses; Mr. Coffey and Mr. B. Burt, I think, were the only ones present. Mr. Sweetser of Sacramento sent his regrets. We did not know of the presence of Mr. & Mrs. Burt till after the exercises were over. They came from Amador this morning. They have been in to see me since the funeral - are stipping at Susie's. She looks very natural. I have not met her before for ten or more years. While they were here this evening, Mrs. Gove came in with Bro. George. And it has been almost as long since I have met her. I forgot to write that the body of Ada's little Winnie was taken up last night and deposited in our new lot. So now our two lost ones rest near each other. I received a letter full of sympathy this P.M. from Ada, written by her own hand, so she must feel quite strong. Mary and Mr. Moore went homes by train tonight, as he cannot longer leave the toll house. (T.S.R. 43. 2 P.M. 75. S.S. 55.)