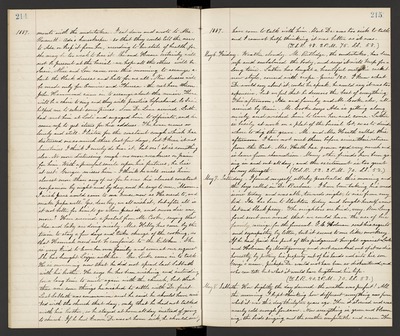 1887. with the undertaker. I sat down and wrote to Mrs. Barnett - Ada's housekeeper - so that they could tell the news to Ada or keep it from her, according to her state of health, for she may be too weak to bear it. She and Horace certainly will not be present at the burial - we hope all the others will be. Susie, Alice and Lou came over this morning to arrange about the black dresses and hats for us all. New dresses will be made only for Eunice and Theresa - the rest have them. John Hammond came in to arrange about the music. There will be a choir to sing and they will practice beforehand. So Susie helped me to select some pieces. Soon Dr. Lane arrived. Luther had met him at Lodi and engaged him to officiate, and he came up to get items for his address. The house seems so lonely and still. I listen for the constant cough which has distressed me so much these last few days, but I hear it not. Sometimes I think I surely do hear it, but no! it is something else. No more distressing cough - no more weakness or pain for him. With a peaceful smile upon his features, he lies "at rest". Georgie misses him - I think he will miss him almost more than any of us - for he was his almost constant companion by night and by day, and he says to me, "Mamma I wish Jesus would come to our house now as He used to, and make papa well". Yes, dear boy, we all wish it, but after all is it not better for him to go where Jesus is, and never die anymore? Have received a postal from Mr. Cooke, saying that Ada and baby are doing nicely. Mrs. Kelly has come by the train to stay a few days and take charge of the cooking, so that Hannah need not be confined to the kitchen. She is very kind to leave her own family and come at our request She has brought Lizzie with her. Geo. Locke came in to talk. He is mourning now that he did not spend last Sabbath with his brother. He says he has been wishing and intending for a long time to unite again with the church, but that there were some things he wished to settle with Dr. first. Last Sabbath was communion and he said he should have united with the church that day, only that he had not talked with his brother, so he stayed at home all day instead of going to church. If he had known Dr. was at home sick, he should surely

May 6. Friday. Weather cloudy. Mr. Rutledge, the undertaker, has been up and embalmed the body, and says it will keep for a long time. Luther has bought a beautiful metallic casket new style, covered with crepe - price $120. I know what Dr. would say about it, could he speak, he would say it was too expensive, but we feel that he deserves the best of everything. This afternoon, Ida and family and Mr. Cooke also, all arrived by train. Mr. Cooke says Ada is getting along nicely and wished him to leave her and come. Luther is busily at work on a plat of the burial lot, so as to decide where to dig the grave. Mr. and Mrs. Heath called this afternoon. I have not met them before since their return from the East. Mrs. Heath has grown aged very much and is lame from rheumatism. Many other friends have been going in and out all day, and the excitement is too great for my strength. (T.S.R. 52. 2 P.M. 70. S.S. 52.)

May 7. Saturday. I found myself utterly prostrated this morning and the boys called in Dr. Barbour. I have been taking his medicine today and was able, towards night, to rise from my bed. Ida has been to Stockton today and bought herself a new hat and black Jersey. The neighbors are kind, very. Ben Langford sent me word that we could have the use of his family carriage for the funeral. G.C. Holman sent his regrets and sympathy by letter, but it seems to me like mockery. If he had paid his pact of the judgment brought against Locke and Holman by Montgomery and not sneaked out of it so dishonestly by putting his property out of his hands and into his son George's name, perhaps Dr. would not have been so disheartened, and who can tell but what it would have lengthened his life. (T.S.R. 40. 2 P.M. 70. S.S. 53.)

May 8. Sabbath. How brightly the day dawned - the weather was perfect! All the morning I kept thinking how different everything was from what it was this day thirtytwo years ago. Then it stormed and was nearly cold enough for snow. Now everything is green and blooming, the birds singing and the weather comfortable and warm. Then