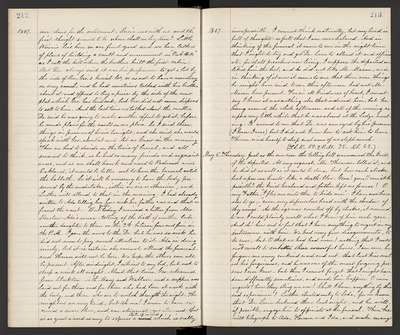 1887. over plans for the interment. Susie was with us and the first thought seemed to be where shall we lay him? Little Winnie lie's here in our front yard and we have talked of plans of building a vault and monument on "Oak Hill" as I call the hill where the brothers built the first cabin. But Dr. always said it was his preference to get a lot by the side of Bro. Geo.'s burial lot, so as not to have a cemetery on every ranch, and he had sometimes talked with his brother about it and offered to buy a piece by the side of the new plat which Geo. has laid out, but Geo. did not seem disposed to sell to him. And the last time we talked about the matter Dr. said he was going to make another effort to get it, before he made plans for the vault on our place. So I said these things in presence of Susie tonight, and she said she would speak with Geo. about it and let us know in the morning. Then we had to decide on the time of burial, and all seemed to think, as he had so many friends and acquaintances, and as we shall have to send word to Redwood and Oakland, it would be better not to have the funeral until the Sabbath. So it will be necessary to have the body preserved by the undertaker, either in ice or otherwise, and Luther will attend to that in the morning. I had already written to Ada telling her how sick her father was and that we feared the worst. But yesterday I received a letter from Mrs. Barstow - Ada's nurse - telling of the birth of another babe - another daughter to them on the 2nd between four and five in the P.M. I gave the news to the Dr. but he was so sick he did not seem to pay much attention to it. Ada is doing nicely, but it is certain she cannot attend the funeral, and Horace will not be here. We hope the others can all be present. After midnight, I retired to my bed, but not to sleep a wink all night. About that time, Geo. returned from Stockton with Mary and Wallace and a supper were laid out for them and for those who had been at work with the body, and those who are to watch through the night. The neighbors are very kind, but ah me! I seem to have received a severe blow, and am stunned - yes stunned - that is as good a word as any to express a state of mind which is really

1887. inexpressible. I cannot think naturally, but my head is full of thoughts - so full that I am overwhelmed. And in thinking of the funeral it came to me in the night time that I ought to try and get Dr. Lane to attend it and officiate, for of all preachers now living, I suppose the departed one liked him the best, and he did not like Mr. Mason, and in thinking of it now it seems to me that there were things he might have said to me this afternoon had not Mr. Mason been present. For in all kindness of heart, I must say I know it was nothing else that induced him, but he hung around the whole afternoon and all of the evening except a very little while that he was absent at the Lodge meeting. It seemed to me that Dr. was annoyed by his presence (I know I was) but I did not know how to ask him to leave. Theresa cried herself to sleep and none of us slept much. (T.S.R. 50. 2 P.M. 75. S.S. 62.)

May 5. Thursday. Just as the sun rose the tolling bell commenced the knell of the departed. At my request, Mr. Thomson tolled it, and he did it as well as it could be done, but how each stroke beat upon our hearts like a death - blow. Gone! gone!! can it be possible? - the kind husband and father left us forever! O my Father, "I flee me unto thee to hide me" - I have nowhere else to go, - "cover my defenceless head with the shadow of thy wings". As the age was counted off by strokes, it seemed to me I could plainly recall what I knew of him each year. And oh! how sad to feel that I have anything to regret in my intercourse with him. We had very few disagreements, to be sure, but O that we had had none! nothing that I could now recall to embitter these sorrowful hours. I am sure he forgave me every unkind word and act - that last kiss sealed his forgiveness, and he was one of the most forgiving persons I ever knew - but then I cannot forget that I might have done differently sometimes, and made him happier. O vain regrets! how they sting me now! Shall I learn anything by this sad experience? Luther started early to Lodi, for we learn that Dr. Lane lectured there last night, and he will, if possible, engage him to officiate at the funeral. Then he will telegraph to Ada, Horace and Ida, and make arrangements