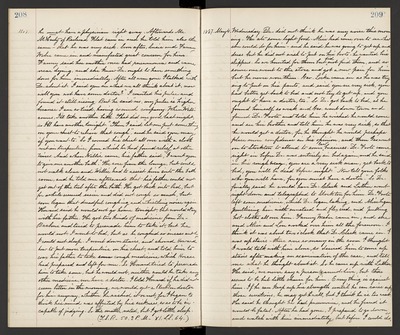 1887. he must have a physician right away. Afterwards Mr. McCarty of Railroad Flat came in and he told him also the same - that he was very sick. Soon after, Susie and Fanny Weber came in and manifested great concern for him. Fanny said her mother once had pneumonia and came near dying, and she know Dr. ought to have something done for him immediately. After all were gone I talked with Dr. about it. "I said you see what we all think about it, now will you not have some doctor?" I counted his pulse and found it still rising. But he said "no, my pulse is higher because I am so tired, having so much company. When Willie comes, I'll take another bath. That did me good last night, so I'll have another tonight". Then I said "let me put something on your chest to relieve that cough," and he said "you may, if you want to." So I covered his chest all over with a cloth wet in turpentine, from which he had found relief at other times. And when Willie came, his father said, "I want you to give me another bath." He rose from the lounge, but could not walk alone and Willie had to assist him into the bathroom, and he told me afterwards that his father could not get out of the tub after the bath. He got back into bed, but for awhile seemed easier and did not cough so much, but soon began that dreadful coughing and whistling noise again. Howard said he would not go home tonight, but would stay with his father. He got two kinds of medicine from Dr. Barbour and tried to persuade him to take it, but he would not. I went to bed, but as he coughed so incessantly I could not sleep. I went downstairs, and showed Howard how to put more turpentine on his chest, and told him to wax his father to take some cough medicine which Horace had prepared and left for me. So Howard tried to persuade him to take some, but he would not, neither would he take any other medicine, nor have a doctor. I told Howard if he did not seem better in the morning, we would get a Stockton doctor for him anyway, whether he wished it or not, for I began to think his mind was affected by his sickness, so as to be incapable of judging. So the matter rested, but I got little sleep. (T.S.R. 50. 2 P.M. 81. S.S. 64.)

1887. May 4. Wednesday. Dr. did not think he was any worse this morning. He ate some light food. Alice had come over to see what she could do for him - and he said he was going to get up and dress but he did not wish to put on his boots - he wanted his slippers. So we hunted for them but did not find them, and so someone went to the store and got a new pair for him but he never wore them. Geo. Locke came in as he was trying to put on his pants, and said "you are very sick, you had better get back to bed and not try to get up, and you ought to have a doctor, too." So Dr. got back to bed, as he found himself so weak and Geo. went down town and found Dr. Foote and told him he wished he would come and see his brother and tell him he was very sick, so that he would get a doctor, for he thought he would perhaps place more confidence in his opinion, and then Geo. went on to Stockton to attend to some law business. Dr. Foote came right in before Dr. was entirely in bed again, and he said in his rough way, "you are a very sick man, get back to bed, you will be dead before night." Now tell your folks who you will have, for you must have a doctor." So Dr. finally said he would have Dr. Clark and Luther went right down and telegraphed to Stockton for him. Dr. Foote left some medicine, which Dr. began taking, and Alice began poulticing him with mustard and flaxseed, and putting hot cloths all over him. Fanny Weber came in, and she and Alice and Lou worked over him all the forenoon. I think it was about two o'clock that Dr. Clark came in. I was upstairs - there were so many in the room I thought I would talk with him alone, so desired him to come upstairs after making an examination of the case, and tell me what he thought about it. So he came up with Luther. He said, "we never say a person cannot live, but there seems to be but little chance for him. Everything is against him. If he can keep up his strength until he can raise up those secretions, he may get well, but I think he is too weak." He said he thought he had pneumonia, and he feared it would be fatal. After he had gone, I prepared to go down and watch with him immediately, but before I could do so