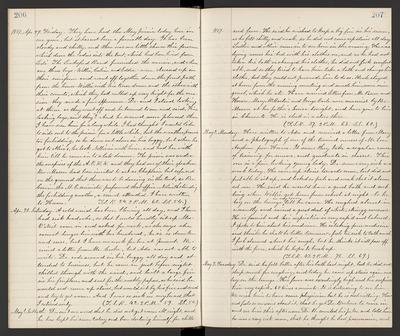 1887. Apr. 29. Friday. They have had the May picnic today here in our grove, but it has not been a favorable day. It has been cloudy and chilly, and there was one little shower this forenoon which drove the ladies into the tent, which had been hired from Lodi. The Lockeford Band furnished the music, and when our three boys - Willie, Calvin and Eddie - were dressed up in their uniform and went off together down the front path from the house - Willie with his tenor drum and the others with their cornets, which they had rubbed up very bright for the occasion - they made a fine appearance. Dr. and I stood looking at them as they went off and he turned to me and said, "Fine looking boys, ain't they?" And he seemed more pleased than I have seen him for a long while. I had thought I would like to ride out to the picnic for a little while, but the weather proved too forbidding, so he drove out alone in his buggy, but when he got to Alice's, he took Nellie in with him, and had her with him till he came in to a late dinner. The picnic was under the auspices of the A.O.U.W. and they had one of their speakers. Rev. Mason had been invited to act as Chaplain but refused on the ground that there was to be dancing in the tent, so Rev. Corwin, the M.E. minister performed that office. Notwithstanding the forbidding weather, a crowd attended. I have written to Horace. T.S.R. 54. 2 P.M. 60. S.S. 54.)

Apr. 30. Saturday. A cold wind has been blowing all day, and I have had sick headache, so that I Could hardly sit up. Mrs. O'Neil came in and asked for work, as she says she cannot longer live with her husband, he is so drunken and cross, but I have no work for her at present. Received a letter from Mr. Cooke, but Ada was not able to write. Dr. rode around in his buggy all day and attended to business, but he came in just before night chilled through with the wind, and built a large fire in his fireplace, and sent for the weekly papers, as he said he would not come up stairs, but would sit by his fire and read and try to get warm. And I was so sick in my head that I retired early. (T.S.R. 42. 2 P.M. 59. S.S. 54.)

May 1. Sabbath. Dr. sent one word that he did not get warm all night, and he has kept his room today and been doctoring himself for chills

1887. and fever. He said he wished to keep a big fire in his room, as he felt chilly and weak, so he did not come upstairs all day. Luther and Alice came in to see him in the evening. He was lying across his bed with his clothes on, and as he had not taken his bath or changed his clothes, he did not look comfortable, and so they tried to have him take a bath and change his clothes, but they could not persuade him to do so. Uncle stayed at home from the evening meeting and made him some nice gruel, which he ate. Have received letters from Mr. Pascoe and Horace. Mary McMartin and George Earle were married by Rev. Mason at her father's house tonight, and have gone to live in Clements. He is clerk in a store there. (T.S.R. 37. 2 P.M. 68. S.S. 60.)

May 2. Monday. Have written to Ada and received a letter from Mary and a photograph of one of the trained muses of McLean Asylum from Horace. It seems they take a regular course of training for muses, and graduate in classes. This one is a fine looking young lady. Dr. seems very sick and weak today. He came up stairs towards noon, but did not feel able to sit up, and looked so pale and weak that it alarmed me. He said he would have a good bath and rubbing when Willie got home from school at night. So he lay on the lounge in my room till he came. He coughed almost incessantly and raised a great deal of white, stringy mucous. He is feverish and his respiration is very rapid and labored. I spoke to him about his medicine. He is taking fever medicine and thinks he shall be better tomorrow - feels too sick to talk much. I feel alarmed about his cough, but he thinks it will pass off with the fever, which he hopes to break up. (T.S.R. 43. 2 P.M. 78. S.S. 69.)

May 3. Tuesday. Dr. said he felt better after his bath last night, but he did not sleep much for coughing, and today he came up stairs again and lay on the lounge. His fever was exceedingly high and his respiration very rapid. 60 times a minute. It is distressing to see him. We wish him to have some physician but he is not willing. Howard feels so anxious about it, that he got Dr. Barbour to come in and see him this afternoon. Dr. B. counted his pulse and told him he was a very sick man, that he thought he had pneumonia, and