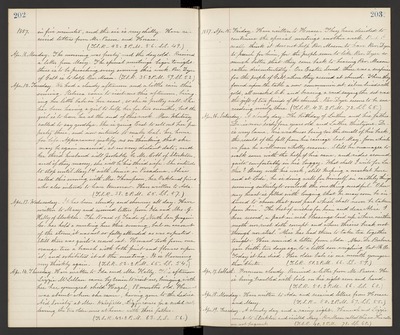 Apr. 12. Tuesday. We had a cloudy afternoon and a little rain this evening. Rebecca came to visit me this afternoon, bringing her little babe in her arms, so she is pretty well. She has been having a girl to help her for two months, but the girl is to leave her at the end of this week. Mrs. Whitney called to say goodbye. She is going East to sell out her property there, and now intends to make Cal. her home for life. Appearances justify us in thinking that she may be again married, at no very distant date, and her third husband will probably be Mr. Cobb of Stockton, and if they marry, she will be his third wife. She intends to stop until May 1st with Annie in Pasadena. Alice called this evening with Mrs. Thompson, her Oakland friend who also intends to leave tomorrow. Have written to Ada. (T.S.R. 38. 2 P.M. 65. S.S. 57.)

Apr. 13. Wednesday. It has been cloudy and showery all day. Have written to Mary and received letters from Ida and Mrs. J. Kelly of Stockton. The Board of Trade of North San Joaquin Co. has held a meeting here this evening, but on account of the storm, it was not so fully attended as was expected. Still there was quite a crowd out. Howard took from our orange tree a branch with both fruit and flowers upon it, and exhibited it at the meeting. It is blooming very thickly again. (T.S.R. 52. 2 P.M. 65. S.S. 54.)

Apr. 14. Thursday. Have written to Ida and Mrs. Kelly. This afternoon Lizzie McLellan came by train to visit us, bringing with her her youngest child Hazel, 18 months old. Hannah was absent when she came, having gone to the Ladies Aid Society at Mrs. Wakefields. Lizzie comes for a needed rest, leaving the two older ones at home with their father. (T.S.R. 42. 2 P.M. 63. S.S. 56.)

1887. Apr. 15. Friday. Have written to Horace. They have decided to continue the special meetings another week. But I really think it does not help Rev. Mason to have Rev. Dyer to preach for him, for the people seem to like Rev. Dyer so much better, that they come back to hearing Rev. Mason rather discontentedly. On Easter Sund. there was a surprise for the people of Galt, when they arrived at church. There they found upon the table a new communion set, silver lined with gold, all marked C.C. and bearing a card saying the set was the gift of two friends of the church. Rev. Dyer seems to be succeeding nicely there. (T.S.R. 43. 2 P.M. 72. S.S. 65.)

Apr. 16. Saturday. A cloudy day. The birthday of Luther and his father. Dr. is now sixtyfour years old and Luther thirtyone. Dr. is very lame, his weakness being in the small of his back, the result of the fall from his carriage last May, from which we fear he will never wholly recover. Still he manages to walk some with the help of his cane, and rides around quite comfortably in his buggy. What shall I write for Luther? Busy with his work, still keeping a market here and at Lodi, he is doing well for himself in earthly things seeming entirely to overlook the "one thing needful". O how my heart is filled with longing that he may soon be induced to "choose that good part which shall never be taken from him". The best of wishes for him and dear Alice I here record, a part in rich blessings laid up "where neither moth nor rust doth corrupt and where thieves break not through nor steal". Alice has had them to take tea together tonight. Have received a letter from Ada. Mrs. Dr. Barbour gave birth, two days ago, to a little son weighing but 1- lbs. Today it has died. Her older babe is one month younger than Chester. (T.S.R. 50. 2 P.M. 66. S.S. 59.)