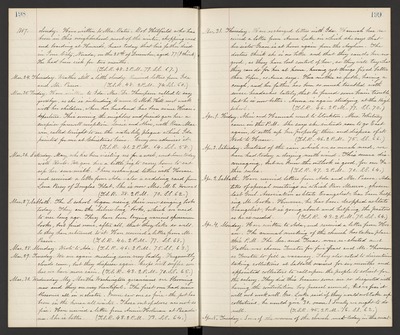 Mar. 25. Friday. Have written to Ida. Mrs. Dr. Thompson called to say goodbye, as she is intending to move to Mok. Hill next week with her children, where her husband has been since Horace's departure. This evening the neighbors and friends gave her a surprise farewell reception. Susie and Alice, with Rosa Marvin, called tonight to see the water lily plaque which Ida painted for me at Christmas time. Every one admires it. (T.S.R. 41. 2 P.M. 64. S.S. 58.)

Mar. 26. Saturday. Mary, who has been visiting us for a week, went home today with Uncle. We gave her a little pig to carry home to eat up her sour milk. I have exchanged letters with Horace and received a letter from Ada - also a wedding card from Lena Perry of Douglas Flat. She is now Mrs. M.E. Howard. (T.S.R. 38. 2 P.M. 70. S.S. 62.)

Mar. 27. Sabbath. The S. school began using their new singing books today. They are the "Silver Song" books, which we used to use long ago. They have been trying various specimen books, but find none, after all, that they like so well. So they have returned to it. Have received a letter from Mr. Pascoe. (T.S.R. 44. 2 P.M. 77. S.S. 68.)

Mar. 30. Wednesday. My Martha Washington geraniums are blooming now and they are very beautiful. The first one had nine blossoms all in a cluster. I never saw one so fine - the pot has been in the house all winter. Those out of doors are not so fine. Have received a letter from Annie Holman at Pasadena. She is better. (T.S.R. 43. 2 P.M. 73. S.S. 64.)

Mar. 31. Thursday. Have exchanged letters with Ida. Hannah has received a letter from Anna Locke in which she says that her sister Grace is at home again from the Asylum. The doctors think she is no better and that they can do her no good, as they have lost control of her, so they will try what they can do for her at home, having got things fixed better than before, as Anna says. Her mother is feeble, having a cough, and her father has been so much troubled with severe headaches lately, that he feared some brain trouble, but he is now better. Anna is again studying at the High school. (T.S.R. 46. 2 P.M. 77. S.S. 70.)

Apr. 3 Sabbath. Have received letters from Ada and Mr. Pascoe. Ada tells of special meetings in which Rev. Meserve, chosen last Genl. Association as State Evangelist, has been helping Mr. Cooke. However, he has been dropped as State Evangelist, but is going about and helping the pastors as he is needed. (T.S.R. 43. 2 P.M. 70. S.S. 64.)

Apr. 4. Monday. Have written to Ada, and received a letter from Horace. The annual meeting of the church has taken place this P.M. The Sec. and Treas. were re-elected and Father was chosen Trustee for five years and Mr. Thomson as Trustee to fill a vacancy. They also voted to discontinue taking collections at Sabbath services for six months and appointed collectors to call upon the people to solicit for the salary. They did this because some are so disgusted with having the contribution box passed around, but we fear it will not work well. Geo. Locke said if they would not take up collections, he would give $30. more! Surely we ought to do well. (T.S.R. 45. 2 P.M. 76. S.S. 62.)

Apr. 5. Tuesday. Some of the women of the church met today in the meetinghouse