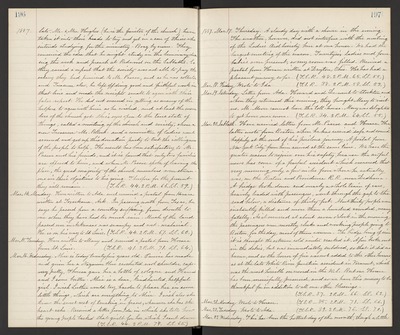 1887. late, Mr. & Mrs. Hughes (he is the Janitor of the church) have taken it into their heads to try and get in a son of theirs who intends studying for the ministry - Boaz by Name. They conceived the idea that he might study in the Seminary during the week and preach at Redwood on the Sabbaths. So they raised a report that the society was not able to pay the salary they had promised to Mr. Pascoe, and as he was collector and Treasurer also, he left off doing good and faithful work in that line and made the receipts small to agree with their false report. He did not succeed in getting as many of the helpers to agree with him as he wished, and at last the members of the church got their eyes open to the true state of things, called a meeting of the church and society, chose a new Treasurer - Mr. Pollock - and a committee of ladies went around and got up this donation party to test the willingness of the people to help. The result has been satisfactory to Mr. Pascoe and his friends, and it is found that only two families are opposed to him, and when Mr. Pascoe spoke of leaving the place, the great majority of the church members were stunnous in their objections to his going. Therefore for the present they will remain. (T.S.R. 44. 2 P.M. 65. S.S. 59.)

Mr. 14. Monday. Have written to Ada and received a postal from Horace written at Texarkana, Ark. In passing north from Texas, he says he passed from a country suffering from drouth to one when they have had too much rain. Much of the land passed over in Arkansas was swampy and wet - malarial. He is on his way to St. Louis. (T.S.R. 44. 2 P.M. 67. S.S. 60.)

Mar. 16. Wednesday. Alice is today twentyfive years old. Eunice has made and given her a Nazarene blue crocheted wool shoulder cape - very pretty, Theresa gave her a bottle of cologne and Hannah and I some butter. Alice is a dear, kindhearted, helpful girl. I wish Luther would try harder to please her in some little things, which are everything to Alice. I wish also she knew the sweet rest of trusting in Jesus, whenever she has the heart-ache. Received a letter from Ida in which she tells how the young people tacked that quilt for her which I sent down. (T.S.R. 44. 2 P.M. 74. S.S. 65.)

1887. Mar. 17. Thursday. A cloudy day with a shower in the evening. The weather, however, did not interfere with the meeting of the Ladies Aid Society here at our house. We had the largest meeting of the season. Twentysix ladies and four babies were present, so my room was filled. Received a postal from Horace written at Dayton, Ohio. He has had a pleasant journey so far. (T.S.R. 48. 2 P.M. 65. S.S. 55.)

Mar. 20. Sabbath. Have received letters from Mr. Pascoe and Horace. The latter wrote from Boston when he has arrived "safe and sound" happily at the end of his perilous journey. A postal from New York City from him arrived at the same time. We have the greater reason to rejoice over his safety, because the awful news has come of a fearful accident which occurred that very morning, only a few miles from where he actually was, on the Boston and Providence R. R. near Dedham. A bridge broke down and nearly a whole train of cars, heavily loaded with passengers, went through the gap to the road below, a distance of thirty feet. About thirty people were instantly killed and more than a hundred wounded, many fatally. As it occurred at about seven o'clock in the morning, the passengers were mostly clerks and working people going to Boston, for the day, most of them women. The bridge being of iron it is thought the extreme cold winter cracked it. A fire broke out in the debris, but was immediately subdued, so that it did no harm, and so the horror of fire was not added to the other horrors, as at the late White River Junction accident in Vermont, which was the most horrible on record in the U.S. But our Horace has been mercifully preserved, and so we have this mercy to be thankful for in addition to all our other blessings. (T.S.R. 37. 2 P.M. 66. S.S. 62.)

Mar. 23. Wednesday. This has been the hottest day of the month, though a little