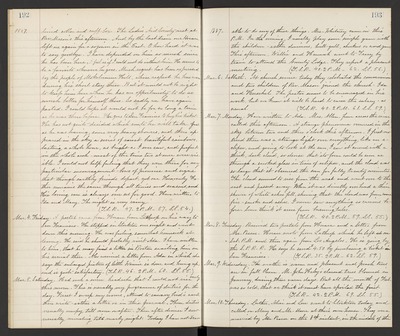 1887. lined collar and cuff-box. The Ladies Aid Society met at Rev. Mason's this afternoon. And by the last train our Horace left us again for a sojourn in the East. O how hard it was to say goodbye. I have depended on him so much since he has been here, I feel as if I could not do without him. He seems to be a favorite wherever he goes. Much regret has been expressed by the people of Mokelumne Hill, whose respect he has won during his short stay here. But it would not be right to keep him here when he has an opportunity to do so much better for himself there. So sadly we have again parted. I could hope it would not be for so long a time as he was there before. He goes to San Francisco to buy his ticket. He has not quite decided which route he will take. Just as he was leaving, some very heavy showers, and these appeared in the sky a series of most beautiful rainbows, lasting a whole hour, as bright as I ever saw, and perfect in the whole arch - most of the time two at once were visible. I could not help feeling that they were there for my particular encouragement- bows of promise and signs that though earthly friends depart, yet our Heavenly Father remains the same through all times and seasons, and His loving care is always over us for good. Have written, to Ida and Mary. The night is very rainy. (T.S.R. 47. 2 P.M. 57. S.S. 54.)

Mar. 4. Friday. A postal came from Horace from Lathrop on his way to San Francisco. He stopped in Stockton over night and went down this morning. He was feeling somewhat homesick at leaving. He said he should probably visit Ada. I have written to him, that he may find a letter in Boston awaiting him on his arrival there. Also received a letter from Ada in which she says the enlarged picture of little Winnie is done and hung up, and is quite satisfactory. (T.S.R. 46. 2 P.M. 60. S.S. 55.)

Mar. 5. Saturday. Had such a severe headache that I could not rise early this morn. This is usually my programme of duties for the day. First I sweep my rooms, attend to canary bird's wants, then write - either a letter or in this Journal. These duties usually occupy till noon or after. Then after dinner I sew - usually mending till nearly night. Today I have not been

1887. able to do any of these things. Mrs. Whitney came in this P.M. In the evening, I usually play some simple game with the children - either dominoes, hull-gull, checkers or word game. This afternoon, Willie and Hannah went to Tracy by train to attend the County Lodge. They report a pleasant meeting. (T.S.R. 40. 2 P.M. 62. S.S. 56.)

Mar. 6 Sabbath. At church service today they celebrated the communion and two children of Rev. Mason joined the church - Ida and Huschel The pastor seems to be encouraged in his work, but we know it will be hard to raise the salary - as usual. (T.S.R. 40. 2 P.M. 61. S.S. 59.)

Mar. 7. Monday. Have written to Ada. Mrs. Allen, from across the river called this afternoon. A strange phenomena occurred in the sky between two and three o'clock this afternoon. I first noticed there was a strange light over everything, like an eclipse, and going to look at the sun, I saw it covered with a thick, dark cloud, so clense that its form could be seen as through a smoked glass in time of eclipse, and the cloud was so large that it obscured the sun for fully twenty minutes. The cloud seemed to rise from the west and went over to the east and passed away. When it was directly over head a thin shower of white ashes fell, showing that the cloud was from some fire - smoke and ashes. I never saw anything so curious before. Some think it arose from burning tules. (T.S.R. 40. 2 P.M. 59. S.S. 55.)

Mar. 9. Wednesday. The weather is warm and pleasant and peach trees are in full bloom. Mr. John Haley's almond trees bloomed in January, during those warm days. But all the month of Feb. was so cold, that we think it must have spoiled the fruit. (T.S.R. 42. 2 P.M. 69. S.S. 55.)

Mar. 10. Thursday. Luther, Alice and Lou went to Stockton today and called on Mary and Mr. Moore at their own house. They were married by Mr. Pascoe on the 8th instant, in the middle of the