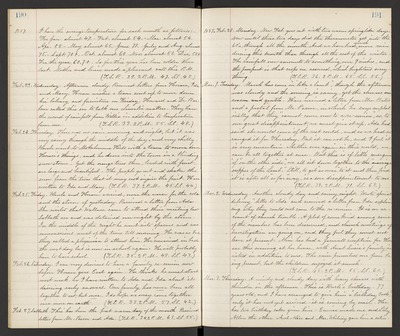 Feb. 23. Wednesday. Afternoon cloudy. Received letters from Horace, Ida and Mary. Horace wishes a team sent up to move down his library and furniture on Friday. Howard and Dr. Barbour called this eve to talk over climatic matters. They have the record of rainfall from Willie in addition to temperature. (T.S.R. 33. 2 P.M. 55. S.S. 48.)

Feb. 24. Thursday. There was no rain morning and night, but it was very rainy through the middle of the day, and very chilly. Uncle went to Mokelumne Hill with a team to move down Horace's things, and he drove into the town in a blinding snow storm. Yet the orange trees there, loaded with first, are large and beautiful. The people go out and shake the snow from the trees that it may not injure the first. Have written to Ida and Mary. (T.S.R. 37. 2 P.M. 45. S.S. 44.)

Feb. 25. Friday. Uncle and Horace arrived, none the worse for the cold and the storm of yesterday. Received a letter from Ada. She writes that Wallace came to attend their meeting last Sabbath eve and was detained over night by the storm. In the middle of the night he went into spasms and was unconscious most of the time till morning. He was so bad they called a physician to attend him. He remained in bed the next day but is now in school again. He will probably have to leave school. (T.S.R. 25. 2 P.M. 48. S.S. 43.)

Feb. 26. Saturday. I am very desirous to have a family re-union now before Horace goes East again. He thinks he must start next week. So I have written to Ada and Ida about it, desiring early answers. Our family has never been all together to eat, but once. I do hope we may come together once more on earth. (T.S.R. 33. 2 P.M. 57. S.S. 42.)

1887. Feb. 28. Monday. Now Feb. goes out with two warm springlike days. Now until these two days did the thermometer get into the 60's, through all the month. And we have had much more rain during this month than through all the rest of the winter. The rainfall now amounts to something over 9 inches, and the prospect is that crops are assured, which brightens everything. (T.S.R. 36. 2 P.M. 65. S.S. 56.)

Mar. 1. Tuesday. March has come in "like a lamb", though the afternoon was cloudy and the evening is caring, yet the showers are warm and gentle. Have received a letter from Mrs. Bates and a postal from Mr. Pascoe, in which he says emphatically that they "cannot come now to a re-union", so, to our great disappointment, we must give it up. Ada had said she would come if the rest could, and so we had arranged it for Thursday. But it cannot be, and I feel it is very uncertain whether ever again in this world, we can be all together at once. But this is of little consequence if "on the other side", we all sit down together to the "marriage supper of the Lamb." Still, to get "so near" to it and then find it is after all "so far" away, is a sore disappointment to me. (T.S.R. 38. 2 P.M. 71. S.S. 63.)

Mar. 2. Wednesday. Another cloudy day and rainy night. Wrote "special delivery" letter to Ada and received a letter from Ida explaining why they could not come to the re-union. It is on account of church trouble. A plot of some kind among some of the members has been discovered, and church meetings of investigation are going on, and they feel they must not leave at present. Alice has had a farewell reception for Horace this evening at her house, with Aunt Susie's family invited in addition to ours. The rain prevented me from being present, but the children enjoyed it much. (T.S.R. 48. 2 P.M. 65. S.S. 60.)

Mar. 3. Thursday. A windy and cloudy day with heavy showers with thunder in the afternoon. This is Uncle's birthday - 77 years old, and I have arranged to give him a "birthday book", only it has not yet arrived - it is coming by mail. He has two birthday cakes given him - Eunice made one and Lily Allen the other. Aunt Alice and Mrs. Whitney gave him a satin