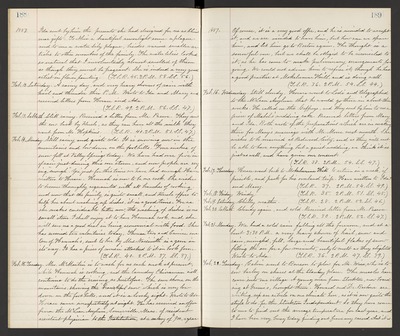 1887. Ida sent by him the presents she had designed for us as Christmas gifts. To Alice a beautiful moonlight scene - a plague - and to me a water lily plague, besides various smaller articles to other members of the family. The water lilies looked so natural that I involuntarily almost smelled of them as though they must be fragrant. She is indeed a very good artist in flower painting. (T.S.R. 45. 2 P.M. 58. S.S. 56.)

Feb. 14. Monday. Still rainy and quite cold. It is snowing now in the mountains and low down on the foothills. Four inches of snow fell at Valley Springs today. We have had over five in. of rain just during this one storm, and now people are crying, "enough". Yes, just for this time we have had enough. Have written to Horace. Hannah is now to be our cook. She wishes to become thoroughly acquainted with all branches of cooking, and now that the family is quite small, and Uncle offers to help her about washing up dishes, it is good time. For as she makes considerable butter now, the washing of dishes is no small item. I shall enjoy it to have Hannah cook, and she will save us a good deal in being economical with food. She has received two valentine's today, Theresa two and Eunice one. One of Hannah's, sent to her by Mrs. Naismith is a gem in its way. It has a piece of music attached to it in book form. (T.S.R. 40. 2 P.M. 37. S.S. 37.)

Feb. 15. Tuesday. Mrs. McMartin is to wash for us each week at present, while Hannah is cooking, and the laundry Chinaman will continue to do the ironing as heretofore. The sun shone on the mountains, showing the "beautiful snow" which is very low down on the foot hills, and it is a lovely sight. Wrote to Ada. Horace came unexpectedly at night. He has received an offer from the McLean Asylum, Somerville, Mass. of resident assistant physician to the Institution, at a salary of $900. a year.

1887. Of course, it is a very good offer, and he is minded to accept it, and we are minded to have him, but how can we spare him, and let him got to Boston again. The thought is a sorrowful one, but we shall be obliged to be reconciled to it, as he has come to make preliminary arrangements for going. We could not advise him to refuse it, though he has a good practise at Mokelumne Hill, and is doing well. (T.S.R. 36. 2 P.M. 54. S.S. 44.)

Feb. 16. Wednesday. Still cloudy. Horace went to Lodi and telegraphed to the McLean Asylum that he would go there in about three weeks. He called on the Geffroy, and they sent by him to us a Juice of Mabels' wedding cake. Received letters from Mary and Ida. Both wrote of the preparations which are in making there for Mary's marriage with Mr. Moore next month. She wishes to be married at Redwood City, and as they will not be able to have anything but a quiet wedding, we think it is just as well, and have given our consent. (T.S.R. 38. 2 P.M. 54. S.S. 47.)

Feb. 22. Tuesday. Calvin went to Burson to plow for Mr. Wise, who is to sow barley on shares at the Stanley place. The measles have come into our village. A young man from Stockton, now boarding at Greene's, brought them. Howard and Dr- Barbour are writing up an article on our climate here, as it is now quite the style to do, for the Stockton Independent. So they have come to me to find out the average temperature for last year, and I have been very busy today finding out from my record, what it is.