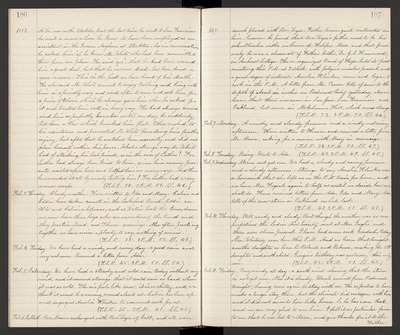 1887. As Dr. was one the Stockton boat the last time he went to San Francisco he met a man whom he knew to have been employed as an assistant in the Insane Asylum at Stockton. So in conversation he asked him if he knew Mr. White who had been committed there from our place. He said "yes", that he had been around him a great deal, but that he is now dead- has been dead a year or more. This is the first we have heard of his death. He also said Mr. White seemed to enjoy talking and bring with him in a friendly way and used often to come and ask him for a piece of tobacco, which he always gave him when he asked for it and treated him well in every way. He had always considered him as perfectly harmless until one day, he suddenly hit him a blow which knocked him flat. Others rushed to his assistance and prevented Mr. White from doing him further injury, but after that he watched him narrowly, and did not place himself within his power. What a strange way Mr.White had of attacking his best friends, as in the case of Luther! For Luther had always been kind to him, given him many presents, waited upon him and helped him in many ways. And then he rewarded it all by nearly killing him! For Luther had a very narrow escape. (T.S.R. 28. 2 P.M. 51. S.S. 46.)

Feb. 3. Thursday. Cloudy weather. Have written to Ida and Mary. Calvin and Eddie have taken comets in the Lockeford Band- Eddie an Alto and Calvin a Soprano, and as Willie beats the tenor drum we now have three boys who are members of the Band and they practice Mond. and Thurs. evenings. Also often practicing together, we have noise a plenty, to say nothing of music. (T.S.R. 25. 2 P.M. 55. S.S. 48.)

Feb. 5. Saturday. We have had a steady and cold rain today without any wind, and it seemed strange that it could rain so hard when it was so cold. The air feels like snow, it is so chilly, and we think it must be snowing sound about us. Calvin has been up and engaged Amelia Klinker to come and cook for us. (T.S.R. 35. 2 P.M. 41. S.S. 41.)

Feb. 6. Sabbath. Rev. Mason exchanged with Rev. Dyer of Galt, and all were

1887. much pleased with Rev. Dyer. Father became quite interested in him, because he found that Rev. Dyer's father used to be his school teacher either in Carver of Halifax, Mass. and that previously he was a classmate of Father's brother, Dr. J.S. Hammond, in Amherst College. The re-organized Band of Hope held its first meeting this P.M. at 3 o'clock, with fortyone members present, and a good degree of interest. Amelia Klinker came and began to cook in the P.M. A letter from Mr. Pascoe tells of snow to the depth of about six inches in Redwood City yesterday, also we learn that there was snow in San Jose, San Francisco and Oakland, but none in Mokelumne Hall, which seems strange. (T.S.R. 32. 2 P.M. 50. S.S. 44.)

Feb. 9. Wednesday. Storm not yet over. We had a cloudy and rainy forenoon and a cloudy afternoon. Strange to say Amelia Klinker was so homesick that she left us on the P.M. train for home, and we have Mrs. Fogarle again to help us until we decide how we shall do. Have received letters from Ada, Ida and Mary. Ada tells of the snow storm in Oakland on Sat. last. (T.S.R. 41. 2 P.M. 51. S.S. 48.)

Feb.10. Thursday. Still windy and cloudy. But though the weather was so unpropitious, the Ladies Aid Society met at Mrs. Inglis, and there were eleven present. I have had seven sick headache today. Mrs. Whitney was here this P.M. And we learn that tonight another daughter is born to Roland and Rebecca, making the 5th daughter and sixth child. George's birthday was yesterday- their only son. (T.S.R. 42. 2 P.M. 51. S.S. 48.)

Feb. 11. Friday. Very windy all day- a south wind-showering that the storm is not yet over. Also it is cloudy. Uncle arrived from Redwood tonight, having come again to stay with us. He expected to have made a longer stay there, but the climate did not agree with him and it did not seem to him like home. So he has come back and we are very glad to see him. I felt it as a particular favor to me that he was led to return, and give thanks for it to the Father.