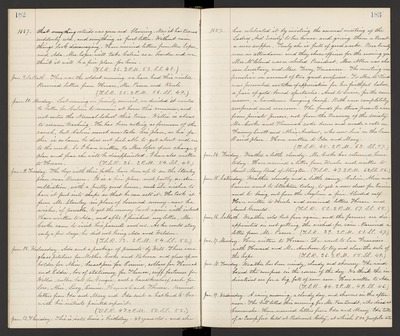 1887. that everything outside was green and blooming. Now it has turned suddenly cold, and everything is frost bitten. Without rain things look discouraging. Have received letters from Mrs. Soper and Ada. Mrs. Soper will take Calvin as a boarder and we think it will be fine place for him. (T.S.R. 26. 2 P.M. 53. S.S. 48.)

Jan. 10. Monday. Last evening in family council, we decided it would be better for Calvin to remain at home this summer, and not enter the Normal School this term. Willie is about to resume teaching. He has been acting as foreman of the ranch, but Calvin must now take his place, as his father is so lame he does not feel able to get about and see to the work. So I have written to Mrs. Soper of our change of plan and fear she will be disappointed. I have also written to Horace. (T.S.R. 26. 2 P.M. 54. S.S. 48.)

Jan. 11. Tuesday. The boys with their father have been up to see the Stanley place near Burson. It is a fine place and partly under cultivation, with a pretty good house, and Dr. wishes to have it put into shape so that he can sell it. He took it from Mr. Stanley in place of borrowed money-now he wishes, if possible, to get the money back again with interest. Have written to Ada, and after I finished my letter, Mr. Cooke came to visit his parents and us. As he could stay only a few days, he did not bring Ada and Weldon. (T.S.R. 32. 2 P.M. 54. S.S. 52.)

Jan. 12. Wednesday. Ada sent a package of presents by Will. There were glass pitchers for Mother Cooke and Rebecca and glass spoon holder for Alice, breast pin for Eunice, collars for Hannah and Eddie, box of stationery for Theresa, cuff fasteners for Willie, rubber ball for George, and a handkerchief each for Lou, Alice, Lucy, Eunice, Hannah and Theresa. Received letters from Ida and Mary and Ida sent a hatband to Geo. with his initials painted upon it. (T.S.R. 43. 2 P.M. 58. S.S. 52.)

1887. has celebrated it by inviting the annual meeting of the Ladies Aid Society to her house and giving them a treat- a nice supper. Truly she is full of good works. Over twenty were in attendance and they chose officers for the ensuring year. Mrs. McCloud was re-elected President, Mrs. Allen and chosen Secretary and Mrs. Terry, Treasurer. The meeting was peculiar on account of two great surprises. To Mrs. McCloud was presented, as a token of appreciation for her faithful labors, a pair of gold-bowed spectacles. And to Susie, for the same reason, a handsome hanging lamp. Both were completely surprised and overcome. The funds for these presents were from private purses, not from the treasury of the Society. Mr. Cooke and Hannah rode down and made a call on Fanny Swett and Alice Andrew, who now live in the Sam Baird place. Have written to Ida and Mary. (T.S.R. 45. 2 P.M. 63. S.S. 57.)

Jan. 15. Saturday. Weather cloudy and a little rainy. Calvin, Alice and Eunice went to Stockton today, to get a new dress for Eunice and to bring out from the Asylum a fine, blooded calf. Have written to Uncle and received a letters Horace and Aunt Gerould. (T.S.R. 50. 2 P.M. 57. S.S. 55.)

Jan.19. Wednesday. A rainy morning, a cloudy day, and showers in the afternoon. The bell tolled this morning for Mr. Van Laudt, who died at Camanche. Have written letters from Ida and Mary. Ida tells of a Camp fire held at Redwood City, at which 500 people ate