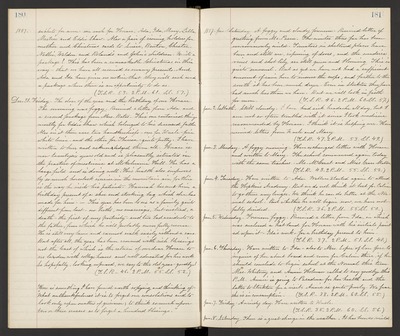 1887. sachets for seven- one each for Horace, Ada, Ida, Mary, Lilla, Mertice and Eddie Shaw. Also a pair of ironing holders for mother and Christmas cards for Susie, Benton, Chester, Nellie, Weldon and Roland's and John's children. Quite a package! This has been a remarkable Christmas in this way- that we have all received so many presents. And Ada and Ida have given us notice that they will each send a package when there is an opportunity to do so. (T.S.R. 53. 2 P.M. 61. S.S. 57.)

Dec. 31. Friday. The close of the year and the birthday of our Horace. The morning was foggy. Received a letter from Ada and a second package from Mrs. Bates. This one contained things mostly for Eddie Shaw which belonged to his deceased father. Also in it there were two handkerchiefs - one for Uncle - fine white linen - and the other for Theresa - quite pretty. I have written to her and acknowledged them all. Horace is now twentysix years old and is pleasantly situated in the practice of medicine at Mokelumne Hill. He has a large field and is doing well. His health also improves by so much horseback exercise in the mountain air, for this is the way he visits his patients. Hannah has sent him a birthday present of a shoe and stocking bag which she has made for him. - This year has been to us as a family quite different from last - no births, no marriages, but instead, a death- the first of my posterity - and two bad accidents to the father, from which he will probably never fully recover. He is still very lame and cannot walk easily without a cane. But after all, the year has been crowned with sick blessings not the least of which is the return of our dear Horace to us laden with college honors and well educated for his work. So hopefully, looking upward, we say to the old year-goodbye! (T.S.R. 46. 2 P.M. 55. S.S. 52.)

Here is something I have found worth copying and thinking of:- "What unthankfulness it is to forget our consolations and to look only upon matters of grievance; to think so much upon two or three crosses as to forget a hundred blessings."

1887. Jan 1. Saturday. A foggy and cloudy forenoon. Received letter of greeting from Mr. Pascoe. The writer thus far has been uncommonly mild. Tomatoes in sheltered places have been and still are, ripening of doors, and the madeira vines and shot lily are still green and blooming. This is quite unusual. But as get we have not had a sufficient amount of rain here to insure the crops, and farther to the south it has been much dryer. Even in Stockton they have had much less than we have. But we will look in faith for more. (T.S.R. 46. 2 P.M. 60. S.S. 57.)

Jan. 2. Sabbath. Still cloudy. I have had sick headache all day, but I am not so often troubled with it since I took medicine recommended by Horace. I think it is helping me. Have received letters from Uncle and Mary. (T.S.R. 47. 2 P.M. 53. S.S. 49.)

Jan. 4. Tuesday. Have written to Ada. Wallace started again to attend the Hopkin's Academy. But we do not think it best for Calvin to go there any longer. We think he can do better at the Normal school. But whether he will begin now, we have not fully decided. (T.S.R. 36. 2 P.M. 55. S.S. 50.)

Jan.6. Thursday. Have written to Ida - also to Mrs. Soper of San Jose to inquire of her about board and room for Calvin there, if he should conclude to begin school at the Normal this term. Mrs. Whitney and Annie Holman called to say goodbye this P.M. Annie is going to Paradina for her health and the latter to Stockton for a visit. Annie is quite poorly. We fear she is in consumption. (T.S.R. 38. 2 P.M. 60. S.S. 55.)

Jan.8. Saturday. There is a great change in the weather. It has been so mild