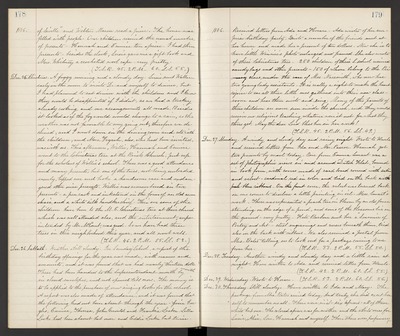 1886. of Seville" and Wilton Mason read a piece. The house was filled with people. Our children received the usual number of presents - Hannah and Eunice ten apiece. I had three presents - besides the clock, Susie gave me a gift book and Mrs. Whitney a crocheted wool cape- very pretty. (T.S.R 45. 2 P.M. 60. S.S. 55.)

Dec. 25. Christmas. A foggy morning and a cloudy day. Susie sent Wallace early in the morn to invite Dr. and myself to dinner, but I had planned to eat dinner with the children and I knew they would be disappointed if I didn't, as we had a turkey already cooking and our arrangements all made. Besides it looked as if the fog would would change to a rain, so the weather was not favorable to my going out, therefore we declined, and I went down in the dining room and ate with the children, and Mrs. Fogarle, also, who had been invited, was with us. This afternoon, Willie, Hannah and Eunice went to the Christmas tree at the Brick Church, put up for the scholars of Willie's school. There was a good attendance and many presents, but one of the trees, not being unloaded evenly, tipped over and broke a handsome vase and endangered other nice presents. Willie was remembered in two presents - a pen rack and inkstand in the form of an old arm chair, and a white silk handkerchief. This eve some of the children have been to the M.E. Christmas tree at their church which was well attended also, and the entertainment, super intended by Mr. McCourt, was good. So we have had three trees in this neighborhood this year, and all went well. (T.S.R. 46. 2 P.M. 55. S.S. 52.)

Dec. 26. Sabbath. Weather still cloudy. In Sunday School, a report of the birthday offerings for the year was made, with names and amounts, and it was found that we had nearly thirteen dolls. These had been handed to the Superintendent month by month in closed envelopes, and not opened till now. The money is to be applied to the purchase of new singing books for the school. A report was also made of attendance, and it was found that the following had not been absent through the year - Josie Inglis, Eunice, Theresa, John Gerould and Frankie Locke. Lilla Locke had been absent but once and Eddie Locke but twice.

1886. Received letters from Ada and Horace. Ada writes of her surprise birthday party. Quite a number of the friends met at her house and made her a present of ten dollars. Now she is to have little Winnie's photo enlarged and framed. She also wrote of their Christmas tree. 250 children of their S.school received candy bags and other presents - 150 of whom belong to the Primary class, under the case of Mrs. Naismith, who now has two young lady assistants. It is really a sight to make the heart rejoice to see all these little ones gathered into their non-classroom and hear them recite and sing. Many of the parents of these children are never seen inside the church, and they would receive no religious teaching whatever were it not for what they thus get. May the dear Lord bless her in her work! (T.S.R. 45. 2 P.M. 56. S.S. 49.)

Dec.27. Monday. A windy and cloudy day and rainy night. Wrote to Uncle and received letters from Ida and Mr. Pascoe. Hannah got two presents by mail today. One from Emma Smart was a set of photographic views in and around Dutch Flat, bound in book form, with covers made of card board covered with satin and velvet- cardinal red in color and tied on the back with pale-blue ribbons. On the front cover, the velvet was turned back on one corner to disclose a little painting in oil - Mrs. Smart's work. There was represented a peach tree in bloom by an old fence standing on the edge of a pond, and some of the blossom lie on the ground- very pretty. Kate Barbour sent her a "Souvenir of Poetry and Art"- steel engravings and verses beneath them, tied also on the back with ribbons. We also received a postal from Mrs. Bates telling us to look out for a package coming to us from her. (T.S.R. 33. 2 P.M. 55. S.S. 50.)

Dec.30. Thursday. Still cloudy. Have written to Ida and Mary. The package from Mrs. Bates arrived today. And truly she did exert herself to remember us all. There were in it six aprons - all of them white but one. The colored apron was for mother and the white ones for Susie, Alice, Lou, Hannah and myself. There there were perfumery