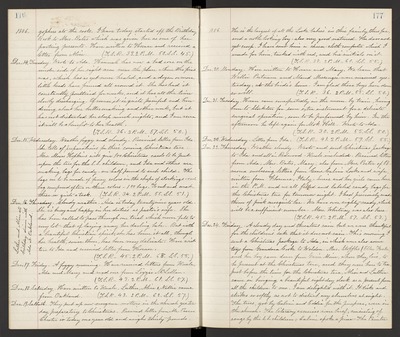 Dec. 14. Tuesday. Wrote to Ada. Hannah has now a bad sore on the under side of her right arm near the place where the fires was, which has as yet never healed, and a dozen or more little heads have formed all around it. She has had it constantly poulticed for weeks, and it has all the time slowly discharging. Of course, it is quite painful and hindering about her butter making and other work, but it has not disturbed her sleep much nights, and I am sure it will be a benefit to her health. (T.S.R. 36. 2 P.M. 57. S.S. 50.)

Dec. 15. Wednesday. Weather foggy and cloudy. Received letter from Ida. She tells of preparations for their coming Christmas tree. Mrs. Moses Hopkins will give 100 Christmas cards to be put upon the tree for the S.S. children, and Ida and others are making bags for candy-one-half pound to each child. The bags are to be made of fancy colors in the shape of stockings - each bag composed of two or three colors - 100 bags. To cut and make these is quite a task. (T.S.R. 34. 2 P.M. 55. S.S. 51.)

Dec. 16. Thursday. Cloudy weather. Ada is today twentynine years old. She is busy and happy in her duties as pastor's wife. She has been called to pass through one trial which never fill to my lot that laying away her darling babe. But with a beautiful Christian spirit, she has home it all, though her health, since then, has been very delicate. Have written to Ida and received letter from Horace. (T.S.R. 45. 2 P.M. 63. S.S. 55.)

Luther and Alice ate birthday dinner with Ada at Oakland.

Dec. 19. Sabbath. They put up new evergreen mottors in the church yesterday, preparatory to Christmas. Received letter from Mr. Pascoe Chester is today one year old and weighs thirty pounds.

Dec. 21. Tuesday. Horace came unexpectedly in the morn. by train, having been to Stockton for some extra instrument for a delicate surgical operation, soon to be performed by him. In the afternoon he left again for Mok. Hill. Wrote to Ada. (T.S.R. 30. 2 P.M. 55. S.S. 50.)

Dec. 23. Thursday. Weather cloudy. Wrote and sent Christmas package to Ida and all in Redwood- Uncle included. Received letters from Ada, Mrs. Bates, Mary, also from Mrs. Porter of Pomona enclosing letters from Cons. Calvin Locke and wife, written from Florence, Italy. Susie and her girls came here in the P.M. and we all filled and labeled candy bags for the Christmas tree for tomorrow night. I had previously made them of pink mosquito bar. We have over eighty ready, which will be a sufficient number. Mrs. Whitney was also here. (T.S.R. 45. 2 P.M. 57. S.S. 53.)

Dec. 24. Friday. A cloudy day and threatens rain but we were thankful for the children's sake that it does not rain. This morning I sent a Christmas package to Ada, in which were also some toys from Grandma Cooke to Weldon. Mrs. Staffles (Ellen Foster) and her boy came down from Gwin Mine, where they live, to be present at the time for the Christmas tree, and they were here to tea. Just before the time for the Christmas tree, Alice and Luther came in bringing a beautiful eight day clock as a present from all the children to me. I am delighted with it. It ticks and strikes so softly as not to disturb my slumbers at night. The trees, got by Calvin and Eddie for the purpose, were in the church. The literary exercises were brief, consisting of songs by the S.S. children, Calvin spoke a piece- The Painter