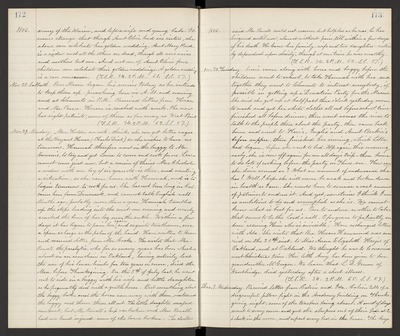 1886. army of the Union, and left a wife and young babe. It seems strange that though Aunt Olive had six sisters, she alone can celebrate her golden wedding. Aunt Mary Reed is a widow and all the others are dead, though all were wives and mothers but one. And not one of Aunt Olive's four children can celebrate their golden weddings. A golden wedding is a rare occurrence. (T.S.R. 34. 2 P.M. 61. S.S. 57.)

Nov. 28. Sabbath. Rev. Mason began his services today as he intends to keep them up - preaching here in A.M. and evening and at Clements in P.M. Received letters from Horace and Mr. Pascoe. Horace is rushed with work. He now has eight patients, some of them as far away as West-Point. (T.S.R 34. 2 P.M. 62. S.S. 57.)

Nov.29. Monday. Mrs. Holden our cook - thinks she can get better wages at the Bryant House (Charles Dial) so she wishes to leave us tomorrow. Hannah therefore went in the buggy to Mr. Hansen's, to try and get Laura to come and cook for us. Laura cannot come just now, but a cousin of theirs - Mrs. Chesholm - a widow with one boy of six years old - is there, and wanting a situation, so she came home with Hannah, and is to begin tomorrow to cook for us. She has not been long in Cal. came here from Denmark, and cannot talk English well. Months ago, probably more than a year, Hannah tumbled up the steps leading into the court one evening and nearly cracked the bone of her leg near the ankle. Within a few days it has begun to pain her again, and is quite troublesome, over a space a large as the palm of the hand. Have written to Horace and received letter from Mr. Cooke. He writes that Mr. Rowell the paralytic, who for so many years has been wheeled about in an armchair in Oakland, having entirely loss the use of his lower limbs for ten years or more, died the Mon. before Thanksgiving. On the 5th of July last, he went out ride in a buggy with his wife and little daughter as he frequently did with a gentle horse. But something about the buggy broke and the horse ran away with them, overturned the buggy and threw them all out. The little daughter escaped unhurt, but Mr. Rowell's hip was broken and Mrs. Rowell had one hand injured - some of the bones broken. The doctors

1886. said Mr. Rowell could not recover but helpless as he was, he has lingered until now, almost without pain, till within a few days of his death. He leaves his family - wife and two daughters - entirely dependent upon charity, though at one time he was wealthy. (T.S.R. 34. 2 P.M. 62. S.S. 57.)

Nov. 30. Tuesday. Susie came along with horse and buggy before the children went to school, to take Hannah with her, and together they went to Clements to interest everybody, if possible in getting up a Donation Party for the Masons. She said she got up at half past three o'clock yesterday mom to wash and got her white clothes all out before school time- finished all before dinner, then went across the river to talk to the people there about the party, then came back home and went to Her's, Inglis' and Aunt Beckie's before supper, then finished her ironing, which Lilla had begun, before she want to bed. Up again this morning early, she is now off again for an all day's trip - then home to do lots of cooking before the party on Thurs. eve. How can she drive around so? What an amount of endurance she has! Well, I hope she will never be weak and broken down in health as I am. She would have to exercise a vast amount of patience to endure it. And yet, sometimes I think I am as ambitious to do and accomplish as she is. We cannot know what is best for us. One to endure, as other to labor that seems to be the Lord's will. O for grace to patiently endure "as seeing Him who is invisible". Have exchanged letters with Ada. She writes that Bro. Horace Hammond was married on the 20th inst. to Miss Anna Elizabeth Hayes' of Oakland, and at Oakland. We thought he was to be married next Christmas time. His little Amy has been given to her grandmother McGregor. We learn that L.D. Greene of Woodbridge died yesterday after a short illness. (T.S.R. 34. 2 P.M. 65. S.S. 57.)

Dec. 1. Wednesday. Received letters from Calvin and Ida. Calvin tells of a disgraceful pillow-fight in the Academy building on Thanksgiving night, some of the teachers being absent. A mob of boys went to every room and got the sleepers out of their bed at 2 o'clock in the morn, and upset every bed in the house. The boys