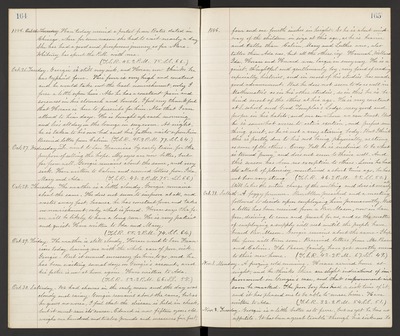 Oct. 26. Tuesday. Georgie is still very sick, and Horace now think he has typhoid fever. His fever is very high and constant and he would take not the least nourishment, only I force a little upon him. Also has a constant pain and soreness in his stomach and bowels. I feel very thankful that Horace is here to prescribe for him. Also that I can attend to him days. He is brought up each morning and his all day on the lounge in any room. At night, he is taken to his own bed and his father waits upon him. Received letter from Calvin. (T.S.R. 45. 2 P.M. 77. S.S. 64.)

Oct. 27. Wednesday. Dr. went to San Francisco by early train, for the purpose of selling the hops. My eyes are now better, but far from well. Georgie remains about the same, and very sick. Have written to Calvin and received letters from Ida, Mary and Ada. (T.S.R. 48. 2 P.M. 75. S.S. 66.)

Oct. 28. Thursday. The weather is a little cloudy. Georgie remains about the same. He does not seem to improve at all, and wastes away fast, because he has constant fever and takes no nourishment, only what is forced. Horace says the fever will be likely to have a long run. He is very patient and quiet. Have written to Ida and Mary. (T.S.R. 55. 2 P.M. 74. S.S. 64.)

Oct. 29. Friday. The weather is still cloudy. Horace went to San Francisco today, leaving me with the whole care of poor, sick, Georgie. But it seemed necessary for him to go, and he has been waiting several days on Georgie's account, and his father is now at home again. Have written to Ada. (T.S.R. 52. 2 P.M. 66. S.S. 58.)

Oct. 30. Saturday. We had showers in the early morn and the day was cloudy and rainy. Georgie remains about the same, but as he grows no worse, I feel that the disease is held in check, but it must run its course. Edward is now fifteen years old, weighs one hundred and twelve pounds and measures five feet,

1886. four and one-fourth inches in height. So he is about midway of the children in size at this age, as he is heavier and taller than Calvin, Mary and Luther were, also taller than Ada was, but all the others viz! Hannah, Willard, Ida, Horace and Howard were larger in every way. He is a quiet, thoughtful and gentlemanly boy, very fond of reading especially histories, and in most of his studies has made good advancement. But he does not seem to do as well in Mathematics as in his other studies, so in this he is bekind most of the others at his age. He is very constant at S. school and Good Templar's Lodge, very good and proper in his habits, and one in whom we can trust. But he is somewhat averse to active exertion, and prefers some thing quiet, so he is not a very stirring body. But I think this is partly due to his not being physically as strong as some of the others. Every Fall he is inclined to be what is termed "puny" and does not seem to thrive well. And this season has been no exception to others. Since he had the attack of plenrisy mentioned a short time ago, he has not been very strong. (T.S.R. 46. 2 P.M. 55. S.S. 50.) Still he has the entire charge of the milking and does it nearly all.

Oct. 31. Sabbath. A foggy forenoon. Rev. Allen preached and a meeting followed to decide upon employing him permanently. But a letter has been received from a Rev. Mason, now in San Jose, desiring to come and preach for us, and so the matter of employing a supply will rest until the people have heard Rev. Mason. Georgie remains about the same - I hope the fever will turn soon. Received letters from Mr. Pascoe and Calvin. The Pascoe family have got mostly moved to their new home. (T.S.R. 42. 2 P.M. 67. S.S. 49.)

Nov. 1. Monday. A freezing cold morning. Horace arrived home at night, and he thinks there are slight indications of improvement in Georgie's case, and that improvement will soon be marked. The poor boy has had a sick time of it, and it has pleased me to be able to nurse him. Have written to Ada. (T.S.R. 32. 2 P.M. 54. S.S. 51.)

Nov. 2. Tuesday. Georgie is a little better as to fever, but as yet he has no appetite. It has been a great trouble though his sickness to