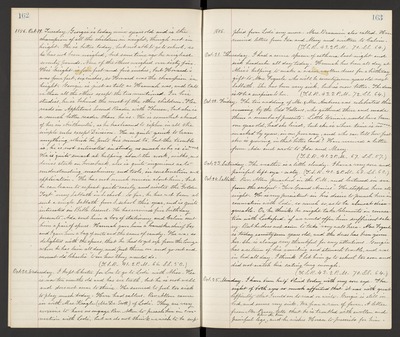 1886. Oct. 19. Tuesday. Georgie is today nine years old and is the champion of all the children in weight, though not in height. He is better today, but not able to go to school, so he has not been weighed, but some time ago he weighed seventy pounds. None of the others weighed over sixty five. His height is four feet and five inches, but Howard's was four feet, six inches, so Howard was the champion in height. Georgie is just as tall as Hannah was, and taller than all the others except the two mentioned. In his studies, he is behind the most of the other children. He reads in Appleton's Second Reader with Theresa, but she is a much better reader than he is. He is somewhat ahead of her in Arithmetic, as he has learned to cipher in all the simple rules except Division. He is quite quick to learn anything which he puts his mind to, but the trouble is, he is not interested in study as much as he is in work. He is quite smart at helping about the work, milks, and drives stock on horseback, also is quite ingenious as to understanding machinery and tools, in construction and application. He has not much music about him, but he can learn to repeat quite easily and recites the "Golden Text" every Sabbath in S. school. So far, he has not been absent a single Sabbath from S. school this year, and is quite interested in Bible lessons. He has received five birthday presents. Ada sent him a box of stationery and Calvin sent him a pair of spurs. Hannah gave him a handkerchief box and I gave him a bag of nuts and the same of candy. He was so delighted with the spurs, that he had to get up from the lounge when he has lain all day, and just them on and go out and mount old "Charlie" to see how they would do. (T.S.R. 41. 2 P.M. 66. S.S. 50.)

Oct. 20. Wednesday. I kept Chester for Lou to go to Lodi with Alice. He is now ten months old and has six teeth, but he is not well and does not seem to thrive. He seemed to feel too sick to play much today. Have had callers. Rev. Allen came in with Mrs. Keagle (Mrs. Dr. Scott) of Lodi. They are very anxious to have us engage Rev. Allen to preach her in connection with Lodi, but we do not think we wish to be supplied

Oct. 21. Thursday. I had a severe spasm of asthma last night and sick headache all day today. Hannah has been all day at Alice's helping to make a warm woollen dress for a birthday gift to Mrs. Fogarle who will be seventyseven years old next Sabbath. She has been very sick, but is now better. The dress is to be a surprise to her. (T.S.R. 43. 2 P.M. 72. S.S. 64.)

Oct. 22. Friday. The tin wedding of Mr. & Mrs. Ambrose was celebrated this evening by the Odd Fellows, who gathered there and made them a number of presents. Little Winnie would have been one year old, had she lived, but she is where time is no more marked by years, in our poor way, and who can tell how fast she is growing in that "better land"? Have received a letter from Ada and wrote to Ida and Mary. (T.S.R. 41. 2 P.M. 67. S.S. 57.)

Oct. 24. Sabbath. Rev. Allen preached in the P.M. and lectured in eve from the subject - "Two Grand Armies". He stopped here all night. He is very persistent in his desire to preach here in connection with Lodi, so much so, as to be almost disagreeable. Or he thinks he might take Clements in connection with Lockeford, if we would offer him sufficient salary. But he does not seem to "take" very well here. Mrs. Fogarle is today seventyseven years old, and the dress has been given her. She is always very thankful for any attentions. Georgie has a return of his vomiting and stomach trouble, and was in bed all day. I think I let him go to school too soon and did not watch his eating long enough. (T.S.R. 43. 2 P.M. 70. S.S. 64.)

Oct. 25. Monday. I have been half blind today with my sore eye. The sight of both eyes so much affected that it was with great difficulty that I could see to read or write. Georgie is still in bed, and seems very sick. We fear a run of fever. A letter from Mr. Pascoe tells that he is troubled with swollen and painful legs below the knee, and he wishes Horace to prescribe for him.