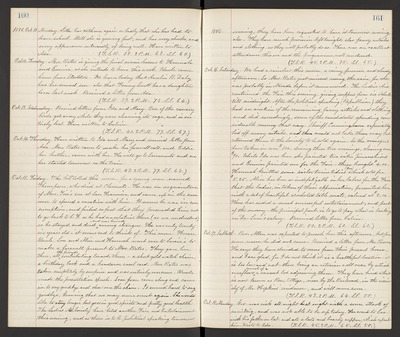 Oct. 12. Tuesday. Mrs. Bates is giving the final music lessons to Hannah and Eunice, as she intends to leave this week. Uncle came home from Stockton. We learn today that Amelia B. Daly has her second son - also that Fanny Swett has a daughter born last week. Received a letter from Ada. (T.S.R. 39. 2 P.M. 72. S.S. 64.)

Oct. 14. Thursday. Have written to Ida and Mary and received letter from Ada. Mrs. Bates came to make her farewell call, and Eddie her brother came with her. He will go to Sacramento and see her started tomorrow on the train. (T.S.R. 43. 2 P.M. 77. S.S. 68.)

Oct. 15. Friday. The bell tolled this morn. for a young man named Thompson, who died at Clements. He was an acquaintance of Mrs. Tice's son at San Francisco and came up in the summer to spend a vacation with him. It seems he was in consumption, and failed so fast that they persuaded him not to go back to S.F as he had no relatives there (as we understand) so he stayed and died and was buried among strangers. He was only twenty six years old - it seems sad to think of. This morn. Horace, Uncle, Lou and Alice and Hannah went over to Susie's to make a farewell present to Mrs. Bates. They gave her three, all the friends contributing towards them - a short gold watch chain, a birthday book and a handsome casel card. Mrs. Bates was taken completely by surprise and was entirely overcome. Uncle made the presentation speech. Soon Joan came along and came in to say goodbye and show me the chain. It seemed hard to say goodbye, knowing that we may never once again. She would like to stay longer but goes in good spirits and pretty good health. The Ladies Aid Society have held another Fair and Entertainment this evening, and as there is to be political speaking tomorrow

1886. evening they have been requested to have it tomorrow evening also. They have much provision left tonight, also fancy articles and clothing, so they will probably do so. There was an excellent attendance this eve and the programme well rendesed. (T.S.R. 45. 2 P.M. 75. S.S. 65.)

Oct. 16. Saturday. We had a rainbow this morn. a rainy forenoon and cloudy afternoon. So Mrs. Bates just missed seeing the rain, for she was probably in Nevada before it commenced. The Ladies Aid continued the Fair this evening, giving suppers from six o'clock till midnight. After the political speaking (Republican) they had an auction of the remaining fancy articles and clothing and did exceedingly, some of the candidates spending considerable money that way. Sheriff Cunmingham especially bid off many articles, and then would not take them away but returned them to the Society to be sold again. So the managers have taken in over $100. during these two evenings, clearing over $90. While Ida was here she painted two satin pincushions and Eunice painted one for the Fair - these brought $4.00. Hannah knitted some sailor twine tidies (two) which sold for $5.25. Alice has been so indefatigable in her labors for the Fair that the ladies, in token of their appreciation, presented her with a set of beautiful crocheted table mats, valued at $2.00. Thus has ended a most successful entertainment, and pack of the money - the principal part is to go to pay what is lacking on Dr. Lane's salary. Received from letter Calvin. (T.S.R. 50. 2 P.M. 60. S.S. 60.)

Oct. 17. Sabbath. Rev. Allen was expected to preach here this afternoon, but for some reason he did not come. Received a letter from Mr. Pascoe. He says they have decided to move from their present house, and I am glad, for I do not think it is a healthful location - it is too low and wet - there being an artesian will near by which overflows much of a vacant lot adjoining them. They have hired what is now known as Rose Cottage, near by the Railroad, in the vicinity of Mr. Hopkins' residence, and will move soon. (T.S.R. 43. 2 P.M. 64. S.S. 55.)