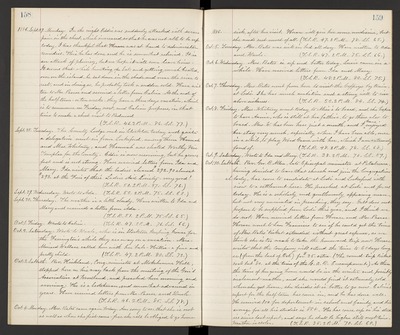 1886. Sept. 27. Monday. In the night Eddie was suddenly attacked with severe pain in the chest, which increased so that he was not able to be up today. I was thankful that Horace was at hand to administer remedies. This he has done and he is somewhat relieved. It is an attack of plurisy, but we hope it will soon leave him.II It seems that while hunting on Sat. and getting much heated, over on the island, he sat down in the shade and near the river to rest, and in doing so, he probably took a sudden cold. Have written to Mr. Pascoe and received a letter from Calvin. At the end of the half term - or ten weeks - they have a three days vacation, which is to commence on Friday next, and Calvin proposes, in that time to make a short visit to Redwood. (T.S.R. 46. 2 P.M. 86. S.S. 77.)

Sept. 28. Tuesday. The County Lodge met in Stockton today and quite a delegation went in from Lockeford, among them Hannah and Mrs. Whitney, and Hannah was elected Worthy Vice Templar for the County. Eddie is now recovering, but he grows fast and is not strong. Have received letters from Ida and Mary. Ida writes that the ladies cleared $292.90 almost $293. at the Fair of their Ladies Aid Society - very good! (T.S.R. 50. 2 P.M. 87. S.S. 76.)

Oct. 3. Sabbath. Rev. Kirkland, Cong. minister at Mokelumne Hill, stopped here on his way back from the meeting of the Geri'l Association at Woodland, and preached here morning and evening. He is a Scotchman, and somewhat advanced in years. Have received letters from Mr. Pascoe and Uncle. (T.S.R. 46. 2 P.M. 85. S.S. 78.)

Oct. 4. Monday. Mrs. Bates came again today. Am sorry to see that she is not as well as when she first came - fear she will be obliged to go home

Oct. 10. Sabbath. Rev. Geo. B. Allen, late Episcopal minister at Petaluma, having decided to leave that church and join the Congregational body, has come to candidate at Lodi and Lockeford with view to a settlement here. He preached at Lodi and for us today. He is a scholarly and gentlemanly appearing man, but not very animated in preaching, they say. Galt does not propose to be supplied from Lodi this year, and I think we do not. Have received letters from Horace and Mr. Pascoe. Horace went to San Francisco to see if he could get the time of Mrs. Bates' ticket extended without great expense, as we think she is too weak to take the homeward trip now. Horace writes that the Company will extend the time to 60 days longer (from the last of Oct.) for $25. extra. (The round-trip ticket cost but $80. at the time of the G.A.R. Encampment.) As then the time of her going home would be in the winter and possibly inclement weather, and she would find it extremely cold when she got home, she decides it is better to go now. Calvin's report for the half-term has come in, and he has done well. He received 100 for deportment in school and family and his average for all his studies is 88+. He has come up in his studies since last report, and says he shall be higher still next time. Weather is cooler. (T.S.R. 35. 2 P.M. 70. S.S. 60.)