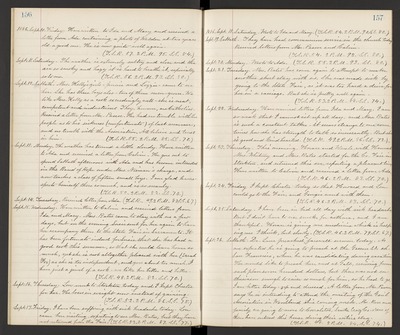 Sept. 12. Sabbath. Mrs. Kelly's girls - Jennie and Lizzie - came to see her. She has three boys also - two of them men grown. We like Mrs. Kelly as a cook exceedingly well - she is neat, competent and industrious They, however, are Catholics. Received a letter from Mr. Pascoe. He had no trouble with his people as to his sickness (unfortunate) of last summer, and no trouble with the Association. All believe and trust in him. (T.S.R. 55. 2 P.M. 85. S.S. 70.)

Sept. 13. Monday. The weather has turned a little cloudy. Have written to Ada and received a letter from Calvin. He goes out to spend Sabbath afternoons with Ada and has become interested in the Band of Hope under Mrs. Nieman's charge, and now teaches a class of fifteen small boys . I am glad he respects himself there so much, and is so manly. (T.S.R. 50. 2 P.M. 82. S.S. 70.)

Sept. 15. Wednesday. Have written to Calvin and received letters from Ida and Mary. Mrs. Bates came to stay with us a few days, but in the evening Susie sent for her again to have her accompany them to the State Fair in Sacramento. It has been fortunate indeed for Susie that she has had a good cook this summer, so that she could leave home so much, yet she is not altogether pleased with her (Sarah Fox) as she is too independent, and goes about too much. I have just a jewel of a cook - we like her better and better. (T.S.R. 48. 2 P.M. 82. S.S. 70.)

Sept. 23. Thursday. This morning, Horace and Uncle, with Hannah Mrs. Whitney and Mrs. Bates started for the Co. Fair in Stockton, and returned this eve, reporting a pleasant times. Have written to Calvin and received a letter from Ada. (T.S.R. 46. 2 P.M. 83. S.S. 70.)

Sept. 26. Sabbath. Dr. Lane preached a farewell sermon today. As we expected, he is going to preach at the Green St. ch. San Francisco, where he was candidating during vacation. He would like to preach here and at Galt, receiving from each place seven hundred dollars, but there was not enthusiasm enough to raise so much for him, so he had go to. I am better today - up and dressed. A letter from Mr. Pascoe says he is intending to attend the meeting of the Geril Association in Woodland this coming week. Mr. Ross and family are going to move to Couralitos, Santa Cruz Co. None of them have entered this house during their entire stay. (T.S.R. 48. 2 P.M. 84. S.S. 74.)