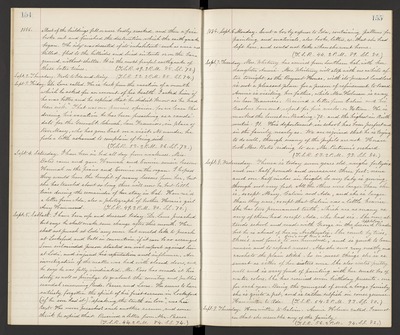 1886. Most of the buildings fell or were badly cracked, and then a fire broke out and finished the destruction which the earth quake began. The city was deserted of its inhabitants such as were not killed, fled to the hillsides and lived intents or on the bare ground, without shelter. It is the most fearful earthquake of these later times. (T.S.R. 49. 2 P.M. 85. S.S. 72.)

Sept. 3. Friday. Dr. Lane called. He is back from the vacation of a month which he asked for an account of his health. I asked him if he was better and he replied that "he didn't know as he had been sick". That was our previous opinion, for we learn that during his vacation he has been preaching as a candidate for the Green St. Church, San Francisco, in place of Rev. Macy, who has gone East on a visit. No wonder he feels little ashamed to complain of being sick. (T.S.R. 52. 2 P.M. 86. S.S. 72.)

Sept. 4. Saturday. I have been in bed all day from weakness. Mrs. Bates came and gave Hannah and Eunice music lessons Hannah on the piano and Eunice on the organ. I hoped they would have the benefit of many lessons from her, but she has traveled about so long there will now be but little time during the remainder of her stay in Cal. Have rec'ol a letter from Ada, also a photograph of brother Horace's girl Amy Hammond. (T.S.R. 49. 2 P.M. 80. S.S. 70.)

Sept. 5. Sabbath. I have been up and dressed today. Dr. Lane preached but says he shall make some change after this month. He shall not preach at Lodi any more but would like to preach at Lockeford and Galt in connection, if it can be so arranged. Some evil minded person started an evil report against him at Lodi, and injured his reputation and influence. An investigation of the matter was had with closed doors, and he says he was fully vindicated. Mr. Ross made it his duty as well as privilege to go about the country and publish scandal concerning Revds. Pascoe and Lane. He seems to have entirely forgotten the spirit of his first sermon in Lockeford (if he ever had it) -"speaking the truth in love", was his text. He never preached such another sermon, and some think he copied that. Received a letter from Mr. Pascoe (T.S.R. 44. 2 P.M. 84. S.S. 74.)

Sept. 7. Tuesday. Mrs. Whitney has arrived from Southern Cal. with her daughter Annie. Mrs. Whitney will stop with us awhile after tonight, as the Bryant House, with its present landlord is not a pleasant place for a person of refinement to board. Annie is visiting her father, while Mrs. Holman is away in San Francisco. Received a letter from Calvin in his teachers have sent report for five weeks - or 1/4 term. He is marked the lowest in Reading -70- and the highest in arithmetic - is 91. His department in school has been perfect and in the family nearly so. We are rejoiced that he is trying to do well, though many of the pupils are not. Horace took Mrs. Bates riding to see Mr. Putnam's orchard. (T.S.R. 53. 2 P.M. 93. S.S. 84.)

Sept. 8. Wednesday. Theresa is today seven years old, weighs fortysix and one-half pounds and measures three feet - nine and one-half inches in height. So many baby is growing, though not very fast. All the others were larger than she is, except Mary, Calvin and Ada, and she is larger than they were, except that Calvin was a little heavier. She has two permanent teeth, which are as many as any of them had except Ada, who had six. She now attends school and read with George in the Appleton's Second Reader but he is ahead of her in Arithmetic. She counts by two's, three's and four's five's and ten's also to one hundred, and is quick to learn music and to repeat verses. Also she sews very neatly and crochets the plain stitch. So in most things she is as smart as either of her sisters were. She also writes pretty will and is very fond of painting with her small box of water colors. She has received seven birthday presents - one for each year. Being the youngest of such a large family she is quite a pet, and is rather selfish in consequence. Have written to Ada. (T.S.R. 54. 2 P.M. 93. S.S. 80.)