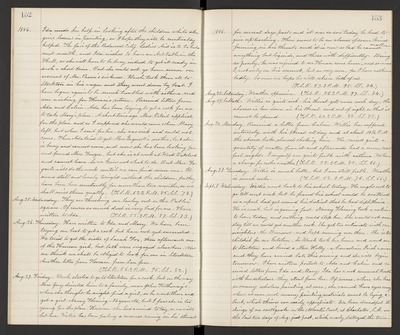 1886. Ida needs her help in looking after the children while she gives lessons in painting, so I hope they will be mutually helped. The fair of the Redwood City Ladies Aid is to be held next month, and Ida wishes to have an Art table in the Hall, so she will have to be busy indeed to get it ready in such a short time. But she could not go home sooner on account of Mr. Pascoe's sickness. Uncle took them all to Stockton in his wagon and they went down by boat. I have begun against be much troubled with asthma, and am wishing for Horace's return. Received letters from Ada and Calvin. Ada has been trying to get a cook for us to take Mary's place. A short time ago, Mrs. O'Neil applied for the place and so I supposed she would come when Mary left, but when I sent for her, she was sick and could not come. Then Ada tried to get Mrs. Ingusoll's mother, but she is busy and cannot come, and now she has been looking for and found Mrs. Frazer, but she is at work at West Oakland and cannot leave. So we know not what to do. But Mrs. Fogarle will do the work until we can find some one. It seems still and lonely tonight without the children, for they have been here constantly for more than two months, so we shall miss them greatly. (T.S.R. 52. 2 P.M. 85. S.S. 73.)

Aug. 26. Thursday. Have written to Ida and Mary. We have been trying our best to get a cook but have not yet succeeded. We tried to get the sister of Sarah Fox, then afterwards one of the Hanson girls, but both were engaged elsewhere. Now we think we shall be obliged to look for one in Stockton. Another letter from Horace from San Jose. (T.S.R. 56. 2 P.M. 95. S.S. 82.)

Aug. 27. Friday. Uncle started to go to Stockton for a cook, but on the way Mrs. Jory directed him to a family near John Tretheway's, when she thought he might find a girl, so he went there and got a girl - Nancy Fleming - 16 years old, but I fear she is too young for the place. However she has a mind to try, so we will let her. Willie has been feeling a soreness coming in his throat

1886. for several days past, and it was so sore today he had to give up teaching. There seems to be an abscess of some kind forming in his throat, and it is now so bad he cannot swallow anything but liquids, and those with difficulty. Being so poorly, he was rejoiced to see Horace come home, and so was I not only on his account, but on my own, for I have asthma badly. So now we hope he will relieve both of us. (T.S.R. 57. 2 P.M. 95. S.S. 84.)

Aug. 30. Monday. Received a letter from Calvin. Willie has suffered intensely with his throat all day and at about 10 1/2 P.M. the abscess broke, almost choking him. He raised quite a quantity of matter from it and afterwards had a more restful night. I myself am quite feeble with asthma. We have a change for cooler weather. (T.S.R. 55. 2 P.M. 85. S.S. 66.)

Sept. 1. Wednesday. Willie went back to his school today. He ought not to go till next week, but he feared his school would be scattered as a report had got around his district that he had diphtheria. He is weak, but is gaining fast. Nancy Fleming took a motion to leave today and nothing could stop her. She would not even stay till we could get another cook.She got too intimate with our neighbors the Bronsons and kept running over there. She is too childish for our kitchen. So Uncle took her home and went on to Stockton and hired Mrs. Kelly - a Canadian Irish woman and they have arrived late this evening and she will begin tomorrow. I have written postals to Ada and Calvin and received letters from Ida and Mary. Ida has a not unusual trouble with her scholars they steal from her. Of course, where she has so many scholars painting at once, she cannot have eyes every where at once, and many painting materials must be lying about, which thrives can easily appropriate. We hear dreadful tidings of an earthquake on the Atlantic Coast, at Charleston, S.C. on the last two days of Aug. just past, which nearly destroyed the tower.