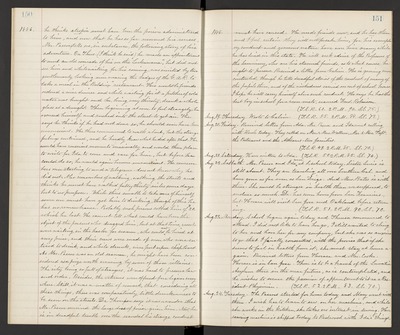 1886. he thinks atropia must have been the poison administered to him, and now that he has so far recovered his senses, Mr. Pascoes tells us, in substance, the following story of his adventure. On Thurs. (I think he said) he made un appointment to meet an old comrade of his on the "Lackawana", but did not see him and while waiting for his coming, was invited by two gentlemanly looking men wearing the badges of the G.A.R. to take a meal in the "Baldwin" restaurant. His would be friends ordered a nice dinner and while waiting for it a pitcher a cold water was brought and he, being very thirsty, drank a whole glass at a draught. Then beginning at once to feel strangely, he excused himself and rushed into the street to get air. He says he think if he had not done so, he should soon have been unconscious. He then commenced to walk about, but the strange feelings continued, and he hardly knew what he did after that. He would have conscious moments occasionally and would then plan to write for Ida to come and care for him, but before he could do so, he would again become unconscious. He remembers once starting to send a telegram - does not know why he did not. Also remembers of walking, walking the streets and thinks he must have walked fully thirty miles some days, but to no purpose. While thus unable to take care of himself some one must have got him to drinking, though of this he has no remembrance. Probably such persons robbed him of $20. which he lost. He cannot tell what could have been the object of the persons who drugged him, but at that time, vessels were waiting in the harbor for seaman, who could not be hired at any price, and their crews were made of men who were entired to drink, and while drunk, were put upon shipboard. As Mr. Pascoe was an old seaman, he might have been considered as a prize worth securing by some of those villains. The city being so full of strangers, it was hard to preserve law and order. Besides, the veterans were offered free liquor every where. Still, it was a matter of remark, that considering all these things, there was comparatively little drunkenness to be seen on the streets. Dr. Thompson says it was a wonder that Mr. Pascoe survived the large dose of poison given him. Now, he is in dreadful trouble over the scandal his strange conduct

1886. must have caused. He needs friends now, and he has them and I feel certain they will not forsake him, for his exemplary conduct and generous nature have won him many while he has lived in this state. He will seek advice of the Professors of the Seminary, who are his staunch friends, as to what course he ought to pursue. Received a letter from Calvin. He is growing more contented, though he tells dreadful stories of the conduct of many of the pupils there, and of the wickedness carried on out of school hours. I hope he will carry himself above such conduct. He says he has the best boy in school for a room-mate, named Fred. Robinson. (T.S.R. 60. 2 P.M. 90. S.S. 75.)

Aug. 22. Sabbath. Mr. Pascoe and Ida were at S. school today. Sister Susie is still absent. They are traveling all over Southern Cal. and have gone us for even as San Diego. And Mrs. Bates is with them. She must be stronger in health than we supposed, to endure so much. Dr. has come home from San Francisco, but Horace will visit San Jose and Oakland before returning. (T.S.R. 51. 2 P.M. 90. S.S. 70.)

Aug. 23. Monday. School began again today and Theresa commenced to attend. I did not like to have her go, I still wanted to cling to her and have her for my company, but she was so anxious to go that I finally consented, with the provise that if she seems to fail in health from it, she must stay at home again. Received letters from Horace and Mr. Cooke. Horace is in San Jose. There is to be a branch of the Lunatic Asylum there in the near future, as is contemplated, and he wishes to secure the promise of appointment to it as a Resident Physician. (T.S.R. 52. 2 P.M. 83. S.S. 70.)

Aug. 24. Tuesday. The Pascoes started for home today and Mary went with them. I wish has to learn to sew on her machine, and while she works in the kitchen, she takes no interest in sewing, Her sewing machine is shipped today to Redwood with Ida's things.