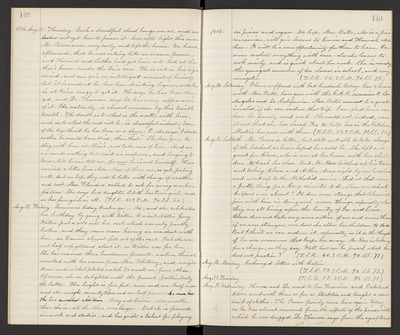 1886. Aug. 12. Thursday. Such a dreadful cloud hangs over us, and we not yet how to pierce it. Soon after light this morn Mr. Pascoe arose, very early, and left the house. We heard afterwards, that he was acting like an insane person, and Howard and Luther had got him into bed at Luther's house, under the Dr's care. He is not in his right mind, and can give no intelligent account of himself but it is evident he has been drinking liquor, and he is at times, crazy to get it. He says he has been drugged, and Dr. Thomson says he has every appearance of it. Ida naturally, is almost overcome by this terrible trouble. The doubt as to what is the matter with him, and as to what the end will be, is dreadful indeed. Some of the boys think he has been on a spue. "O, she says", I should rather he would have died, than that". She has gone to stay with him at Alice's and take care of him. And so we can do nothing but wait in suspense, and longing to know, till he can tell us, for now he is not himself. Have received a letter from Ada. None of them are, as yet, feeling well, but we hope they will be better with change of weather and rest. Mrs. Flanders called to ask for sewing machine fixtures. She says her daughter Edith has twin girls, and so has four girls in all. (T.S.R. 60. 2 P.M. 94. S.S. 80)

Aug. 13. Friday. Eunice is today twelve years old, and she celebrated her birthday by going with Willie to visit Nellie Jory. Willie put a colt into his cart, which was only partly broken, and they came near having an accident with him, as Eunice almost fell out of the cart. But she was not half as frightened about it, as Willie was for her. She has received three handsome presents - a silver thimble marked with her name from Mrs. Whitney, and a night dress and nickel plated watch (a small one) from Alice. Of course, she is delighted with the presents, particularly the latter. Her height - is four feet, seven and one-half inches and she weighs seventy three and one-half pounds.So [?] the two smallest children - Mary and Calvin - were smaller than she is - all the others were larger. But she is forward in work and studies, and has quite a talent for playing

1886. on piano and organ. We hope Mrs. Bates, who is a fine musician, will give lessons to Eunice and Hannah while here. It will be a rare opportunity for them to learn. Eunice cochets everything with ease - also she learns to cook easily, and is quick about her work. She is usually the youngest member of her classes in school, and very energetic. (T.S.R. 56. 2 P.M. 90. S.S. 79.)

Aug. 14. Saturday. I have suffered with bad headache today. Geo. Susie with Mrs. Bates, have gone with the G.A.R. excursion to Los Angeles and So. California. Mrs. Bates cannot be a great invalid, if she can endure that trip. I am glad Susie can leave her family and work. She could not, indeed, were it not that she has Sarah Fox to help her in the kitchen. Mertice has gone with them. (T.S.R. 58. 2 P.M. 91. S.S. 80.)

Aug. 15. Sabbath. Mr. Pascoe is better, but still not able to take charge of the S. school, as Susie hoped he would be. She left a request for Clara, who is now at her house with her children, to teach her class. But Mr. Ross hitched up this team and taking Clara and Arthur, drove right by our S. school and went up to the Methodist service. Didnt that seem a pretty thing for a Cong. minister to do, when our school helpers were absent ? It does seem strange that Clara will join with him in doing such mean things, especially when they are all living upon the bounty of Geo. and Susie. Clara does not take any more notice of me and mine than if we were strangers, nor does she allow her children to do so. But I think we can endure it, especially as it is the thought of her own meanness that keeps her away. Mr. Ross is looking for a charge, so they say. Well, how can he preach what he does not practice ? (T.S.R. 60. 2 P.M. 90. S.S. 77.)

Aug. 18. Wednesday. Horace and Dr. went to San Francis and Oakland. Eddie went with them as far as Stockton and bought a new suit of clothes. The Pascoe family came her again today as he has almost recovered from the affects of the poison with which he was drugged. Dr. Thomson says, from the symptoms