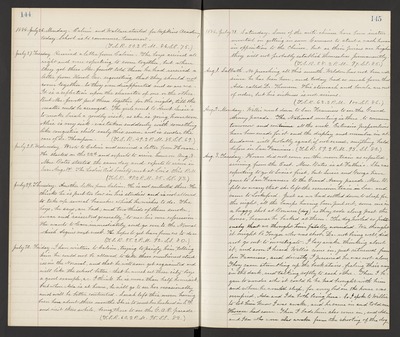 July 27. Tuesday. Received a letter from Calvin. The boys arrived all right and were expecting to room together, but when they got there Mr. Jewett told them he had received a letter from Uncle Geo. requesting that they should not room together. So they were disappointed and so are we. It is a reflection upon the character of one or the other. But Mr. Jewelt just them together for the night, till the matter could be arranged. The girls went to Aunt Susie's to make Sarah a goodby visit, as she is going home soon. Alice is very sick - was taken suddenly with something like congestive chill early this morn. and is under the care of Dr. Thompson. (T.S.R. 49. 2 P.M. 85. S.S. 69.)

July 29. Thursday. Another letter from Calvin. He is not contented there. He thinks he is just too low in his studies and is not allowed to take up several branches which he wishes to do. The boys, he says, are bad, and two thirds of them smoke, swear and "raiseNed generally", to use his own expression. He wants to leave immediately and go over to the Normal which begins next week. He hopes to get leave from us to do so. (T.S.R. 55. 2 P.M. 92. S.S. 80.)

July 30. Friday. I have written to Calvin, trying to pacify him, telling him he could not be allowed to take those mentioned studies in the Normal, and that he will soon get acquainted and will like the school better - that he must set those city - boys a good example, x. c. I think he is more than half homesick, but when Ada is at home, he will go to see her occasionally and will be better contented. Sarah left this morn having been here about three months. She is to meet her husband in S.F. and visit there awhile, being there to see the G.A.R. parade. (T.S.R. 60. 2 P.M. 95. S.S. 82.)

1886. July 31. Saturday. Some of the anti-chinese have been instrumental in getting in some Germans to start a wash house in opposition to the Chinese, but as their prices are higher they will not probably establish themselves permanently. (T.S.R. 58. 2 P.M. 97. S.S. 85.)

Aug. 2. Monday. Willie went down to San Francisco to see the Grand Army parade. The National meeting is there, to commence tomorrow and continue all the week. Extensive preparations have been made for it and the display and member in attendance will probably equal, if not exceed, anything held before in San Francisco. (T.S.R. 59. 2 P.M. 93. S.S. 80.)

Aug. 3. Tuesday. Horace did not come on the noon train as expected, arriving from the East. Mrs. Bates is at Father's. She was expecting to go to Susie's first, but Susie and George have gone to San Francisco to the Grand Army parade. Mrs. B. felt so weary that she left the excursion train in Sac. and came to Lockeford. Just as we had settled down to sleep for the night, all the lamps having been just out, some one in a buggy shot at Bounce (dog) as they rode along past the house , because he barked at them. the dog howled so piteously that we thought him fatally wounded. We thought it might be Towzer who was shot. Dr. not being well, did not go out to investigate. Play awake thinking about it, and soon I heard Willie come in, just returned from San Francisco, and directly I perceived he was into alone. They came stumbling up the back stairs, feeling their way in the dark, and talking softly to each other. Then I began to wonder who it could be he had brought with him and where he would sleep, for every bed in the house was occupied, Ada and Ida both being here. So I spoke to Willie to let him know I was awake, and he came in and told me Horace had come. Then I fade him also come in, and Ada and Ida who were also awake from the shooting of the dog