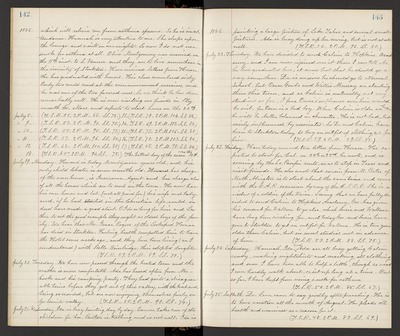 1886. which will relieve me from asthma spasms. So he is in attendance. Hannah is very attentive to me. She sleeps upon the lounge and waits on me nights. So now I do not use smoke for asthma at all. Olive Montgomery was married on the 11th inst. to S. Vanner and they are to live somewhere in the vicinity of Stockton. Have received letters from Horace. He has graduated with honors. His class numbered sixty. Only two could read at the commencement exercises, and he was one of the two favored ones. So we think he has done remarkably well. He is now visiting one friends in Plymouth Co. Mass. and expects to start home on the 20th.

July 19. Monday. Howard is today twentyseven years old, and his only child Chester is seven months old. Howard has charge of the ware house, is Insurance Agent and has charge also of all the houses which are to rent in the town. He now has his own house and lot, (not all paid for) his wife and baby, and, if he had started in the Christian life, would indeed have made a good start. O I do so long for him and Luther to set the good example they ought as oldest boys of the family. We hear that Mr. Isaac Rogers of the Lockeford House has died in Stockton. Failing health compelled him to leave the Hotel some weeks ago, and they have been living (as I understand) with Belle Bainbridge, their adopted daughter. (T.S.R. 59. 2 P.M. 89. S.S. 70.)

July 20. Tuesday. We have now passed through the heated term and the weather is more comfortable. Ada has heard often from Mr. Cooke and his camping party. They had quite a disagree able time before they got out of this valley, with the heat and being so crowded, but are now enjoying themselves finely in YoSemite - valley. (T.S.R. 55. 2 P.M. 90. S.S. 74.)

July 21. Wednesday. Ida is busy painting day by day. Eunice takes care of the children for her. Benton is teething and is not well. Ida is

July 22. Thursday. We have decided to send Calvin to Hopkins Academy, and I am more rejoiced over it there I can tell. As he has graduate here , it seems best that he should go away somewhere. Dr. is anxious he should go to Normal School, but Oscar Genbs and Willie Murray are starting there this turn, and as Calvin is naturally not very studious so far, I fear Oscar's influence over him would be evil, for Oscar is a bad boy. When Calvin is older we hope he will be better balanced in character. He is not bad, but easily influenced by associates. So Dr. and Calvin have been to Stockton today to buy an outfit of clothing, x,c, for him. (T.S.R. 59. 2 P.M. 89. S.S. 75.)

July 23. Friday. Have today received two letters from Horace. He expected to start for Cal. on 22nd or 23rd, he wrote, and is coming by the So. Pacific route, so as to stop in Texas and visit friends. He also wrote that cousin Joan M. Bates of North Abington is to start about the same time and come with the G.A.R excursion by way of the C.P.R.R. She is a widow of a soldier of the Union. Seeing that we have fully decided to send Calvin to Hopkins Academy, Geo. has given his consent for Wallace to go also, which Susie and Wallace have long been wishing for, and today Geo. and Susie have gone to Stockton to get an outfit for Wallace. He is two years older than Calvin, but in most studies not in advance of him. (T.S.R. 53. 2 P.M. 88. S.S. 75.)

July 24. Saturday. Hannah, Ida and Ada are all busy getting Calvin ready, making nightshirts and marking all clothing and even I have been able to help a little, though so weak I can hardly walk about, or sit up long at a time. But so far, I have kept from using smoke for asthma. (T.S.R. 50. 2 P.M. 85. S.S. 67.)