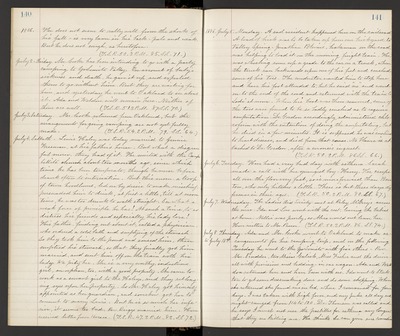 July 2 Friday. Mr. Cooke has been intending to go with a party camping to YoSemite Valley. On account of baby's sickness and death, he gave it up, and expected them to go without him. But they are waiting for him and yesterday he went to Oakland to see about it. Ada and Weldon will remain here. Neither of them are well. (T.S.R. 51. 2 P.M. 87. S.S. 70.)

July 4. Sabbath. Lewis Haley was today married to Jennie Freeman, at his father's house. But what a disgraceful mom. they had of it. He united with the Camp bellite church about ten months ago, since which time he has been temperate, through he never before drank often to intoxication. But this morn. a troop of town hoodlums, led on by desire to make mischief persuaded him to drink, at first a little, till at noon time, he was to drunk to walk straight. See what a weak force of principle he has ! At such a time to so distress his friends and especially his lady love ! His father finding out about it, called a physician who ordered a cold bath and emptying of the stomach. So they took him to the pond and so used him, then emptied his stomach, so that they finally got him married, and sent him off on the train with his lady. We pity her. She is a very worthy, industrious girl, an orphan, too with a good property. She came to work as a servant girl to the Haleys, and they set longing eyes upon her property. So Mr. Haley got himself appointed as her guardian , and somehow got her to consent to many Lewis. But He is so much her inferior, it seems too bad. Rev. Brigys married him. Have received letter from Horace. (T.S.R. 47. 2 P.M. 82. S.S. 72.)

1886. July 5. Monday. A sad accident happened here on the rail road. A load of brick was to be taken up from our brick yard to Valley Spring. Jonathan Blevins, brakeman on the road, was helping to load it on the morning freight train. He was wheeling some up a grade to the car on the car on a truck, when the truck ran backwards upon one of his feet and crushed some of his toes. The conductor wanted him to stop here and have his foot attended to' but he said "no" and went on to the end of the road and returned with the train to Lodi at noon. When his foot was then removed some of the toes were found to be so badly crushed as to require amputation. Dr. Gordon accordingly administered chloroform with the intention of doing the amputating, but he died in a few minutes. It is supposed he was inclined to heart disease, and died from that cause. No blame is attached to Dr. Gordon, after a coroner's inquest. (T.S.R. 50. 2 P.M. 86. S.S. 66.)

July 6. Tuesday. Have had a very bad day with asthma. Sarah made a call with her youngest boy - Harry. He creeps all over the floor very fast, so is more forward than Benton, who only hitches a little. There is but three days difference in their ages. (T.S.R. 50. 2 P.M. 80. S.S. 67.)

July 8. Thursday. Ada and Mr. Cooke went to Oakland to make arrangements for his camping trip, and on the following Tuesday he went to the YoSemile - with five others - Rev. Mr. Sendder, two Misses Gulick, Miss Fisher and the driver - alt with provisions and bedding - in one wagon. Ada and Weldon returned here and have been with us. Ida went to Stockton to get some dressmaking done and do some shopping. When she returned she found me in bed, where I remained for four days. I was taken with high fever, and my pulse all day and night ranged from 114 to 120. Dr. Thomson was called and he says I must not use the pastilles for asthma any longer that they are killing me. He thinks he can give me remedies.