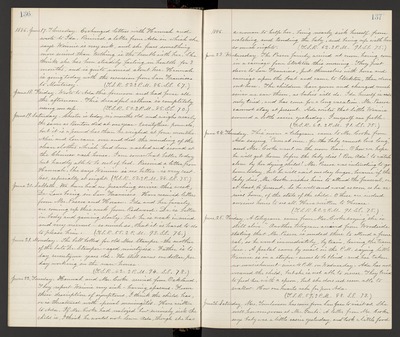 1886. June 17. Thursday. Exchanged letters with Hannah and wrote to Ida. Received a letter from Ada in which she says Winnie is very sick, and she fears something more serious than teething is the trouble with her. She thinks she has been steadily failing in health for 3 months, and is quite worried about her. Hannah is going today with the excursion from San Francisco to Monterey. (T.S.R. 52. 2 P.M. 86. S.S. 67.)

June 19. Saturday. Chester is today six months old and weighs nearly the same as Benton did at one year - twentythree pounds, but it is a pound less than he weighed at four months. Alice and Low came over and did the mending of the clean clothes which had been washed and ironed at the Chinese wash-house. I am somewhat better today but hardly able to be out of bed. Received a letter from Hannah. She says Winnie is no better is very restless, especially at night. (T.S.R. 52. 2 P.M. 88. S.S. 75.)

June 20. Sabbath. We have had no preaching service this week, Dr. Lane being in San Francisco Have received letters from Mr. Pascoe and Horace. Ida and her family are coming up this week from Redwood. Dr. is better in body and gaining slowly, but he is weak in mind and very nervous so much so, that it is hard to do to please him. (T.S.R. 55. 2 P.M. 93. S.S. 76.)

June 22. Tuesday. Hannah and Mr. Cooke arrived from Oakland. They report Winnie very sick - having spasms. From their description of symptoms, I think the child has, or is threatened with final meningitis. Have written to Ada. If Mr. Cooke had realized how seriously sick the child is, I think he would not leave Ada, though she has

June 23. Wednesday. The Pascoe family arrived at noon, having come in a carriages from Stockton this morning. They first drove to San Francisco, just themselves with horse and carriage upon the boat and came to Stockton, then drove out here. The children have grown and changed much since we saw them, as babies will do. Ida herself is will only tried, and has come for a long vacation. Mr. Pascoe cannot stay at present. Ada writes that little Winnie seemed a little easier yesterday. I myself am feeble. (T.S.R. 60. 2 P.M. 91. S.S. 75.)

June 24. Thursday. This mom a telegram came to Mr. Cooke from Ada saying "Come at once, for the baby cannot live long", and Mr. Cooke went on the noon train. O how we hope he will get home before the baby dies ! Poor Ada ! to watch alone by her dying child! Mr. Pascoe was intending to go home today, but he will wait one day longer, because if the baby dies, Mr. Cooke wishes him to attend the funeral, or at least, be present. So he will send word as soon as he arrives home, of the state of the child. O these are indeed anxious hours to us all. Have written to Horace. (T.S.R. 60. 2 P.M. 91. S.S. 75.)

June 25. Friday. A telegram came from Mr. Cooke saying "she is still alive." Another telegram arrived from Woodside stating that Mr. Pascoe is needed there to attend a funeral, so he went immediately by train, leaving the team here. A postal came by mail in the P.M. saying little Winnie is in a stupor - seems to be blind - and has taken no nourishment since 4 P.M. on Wednesday. Ada has not weaned the child, but she is not able to nurse. They tried to feed her with a spoon, but she does not seem able to swallow. How our hearts ache for poor Ada. (T.S.R. 59. 2 P.M. 88. S.S. 73.)

June 26. Saturday. Mrs. Tomlinson has come from San Jose to visit us. She will, however soon at Mr. Grubs ! A letter from Mr. Cooke says baby was a little easier yesterday and took a little food