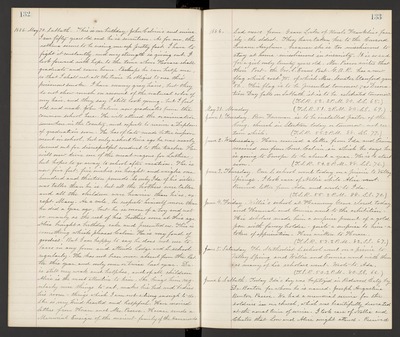 1886. May 30. Sabbath. This is our birthday - John Calvin's and mine. I am fifty years old and he is seventeen. As for me, the asthma seems to be using me up pretty fast. I have to fight it constantly, and any strength is giving out. I look forward with hope to the time when Horace shall graduate and come home. Perhaps he can help me, so that I shall not all the time be obliged to use this poisonous smoke. I have many gray hairs, but they do not show much on account of the natural color of my hair, and they say I still look young, but I feel old and weak. John Calvin now graduates from the common school here. He will attend the examination, somewhere in the Country, and expects to receive a Diploma of graduation soon. He has of lats made better improvement in school, but only a short time ago he was nearly turned out for disrespectful conduct to the teacher He will now drive one of the meat wagons for Luther but hopes to go away to school after vacation. He is now five feet, five inches in height and weighs one hundred and thirteen pounds. So only Ida of his sisters was taller than he is, but all the brothers were taller an all the children were heavier than he is, except Mary. As a rule, he respects himself more than he died a year ago, but he is more of a boy and not so manly as the rest of his brothers were at this age. Alice brought a birthday cake and presented us. This is something which pleases Calvin. He is very fond of goodies. But I am happy to say he does not use tobacco in any form and attends Lodge and S. school regularly. He has not been once absent from the latter this year, and only once or twice last year. Dr. is still very weak and helpless, and of all children Alice is the most attentive to him. She brings him regularly nice things to eat, makes his bed and tidies his room - things which I am not strong enough to do. She is very kind - hearted and helpful. Have received letters from Horace and Mr. Pascoe. Horace sends a Memorial Ensign of the ancient family of the Hammonds

1886. Sad news from Grace Locke of Uncle Franklin's family - the eldest. They have taken her to the Concord Insane Asylum, because she is too mischievous to stay at home - mischievous in insanity. It is so sad for a girl only twenty years old. Mr. Pascoe writes that their Post - the Geo. S. Evans Post - G.A.R. has a new flag which cost $75. of which Mrs. Senator Stanford gave $50. This flag is to be presented tomorrow, as Decoration Day falls on Sabbath, it is to be celebrated tomorrow. (T.S.R. 52. 2 P.M. 80. S.S. 65.)

June 4. Friday. Willie's school at Harmony Grove closed today and Hannah and Eunice went to the exhibition. His scholars made him a surprise present of a gold pen with fancy holder - quite a surprise to him - a token of appreciation. Have written to Horace. (T.S.R. 53. 2 P.M. 82. S.S. 67.)

June 6. Sabbath. Today Ida's boy was baptized in Redwood City by Dr. Benton for whom he is named - Joseph Augustine Benton Pascoe. We had a memorial service for the soldiers in our church, which was beautifully decorated at the usual time of service. I took care of Nellie and Chester that Low and Alice might attend. Received