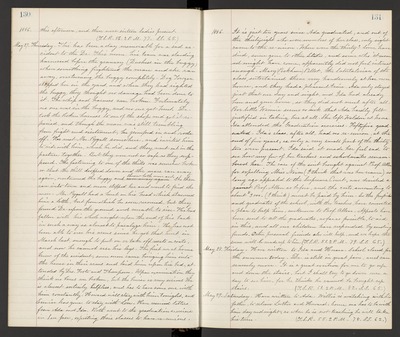 May 27. Thursday. This has been a day memorable for a sad accident to the Dr. This morn his team was standing harnessed before the granary (Duchess in the buggy) when something frightened the man and she ran away, overturning the buggy completely. Dog Towzer stopped her in the yard, and when they had righted the buggy, they thought no damage had been done to it. The whip and harness were broken. Fortunately no one was in the buggy, and no one got hurt. Dr. took the broken harness to one of the shops and got it repaired, and though the man was still trembling from fright and excitement, he jumped in and rode off. He met Mr. Pygall somewhere, and invited him to ride with him, which he did, and they went out in the pasture together. But they were not so safe as they supposed. The fastening to one of the thills was somehow broken so that the thill dropped down and the mare ran away again, overturned the buggy and threw both men out. She then ran into town and men stopped her and went to find the men. Mr. Pygall had a hurt on his head which stunned him a little, but from which he soon recovered, but they found Dr. upon the ground and unable to rise. He had fallen with his whole weight upon the end of his back in such a way as a almost to paralyze him. He has not been able to use his arms since he got that hurt in March last, enough to put on or take off vests or coats, and now he cannot use his legs. The first we at home knew of the accident, some men came bringing him into the house in their arms and laid him upon his bed, attended by Dr. Foote and Thompson. Upon examination they think no bones are broken, but the bruise is very serious He is almost entirely helpless, and has to have some one with him constantly. Howard will stay with him tonight, and Eunice has gone to stay with Low. Have received letters from Ada and Ida. Both went to the graduation exercises in San Jose, expecting their classes to have re-unions.

1886. It is just ten years since Ada graduated, and out of the thirtyeight who were members of her class, only eight came to the re-union. Where were the thirty? Some have died, some gone to other States, and some who it seemed might have come, apparently did not feel interest enough. Mary (Peckham) Pillot, the Salutatorian of the class entertained them very handsomely at her own house, and they had a pleasant time. Ada only stayed just that one day and night, and Ida had already been and gone home, so they did not meet after all. Poor little Winnie seems so sick that Ada hardly felt justified in taking her at all. She left Weldon at home. Ida attended the Graduation exercises. Fiftyfive graduated. Ida's class, after all, had no re-union, at the end of five years, as only a very small part of the thirtytwo were present. Ida said it made her feel sad to see how very few of her teachers and schoolmates remembered her. The case of the suit brought against Prof. Allen for expelling Miss Nixon (I think that was her name) so long ago appealed to the Supreme Court, was decided against Prof. Allen as before, and the costs, amounting to about $3000. (I think) must be paid by him. So the pupils and graduates of the school, with the teachers, have concocted a plan to help him, unknown to Prof. Allen. Appeals have been sent to all the graduates, as for as possible, to aid in this, and all our children have responded by sending funds. Other personal friends also will help, and we hope the sum will be made up to him. (T.S.R. 51. 2 P.M. 79. S.S. 65.)