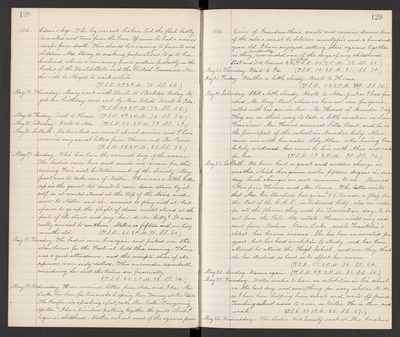 1886. Edson's legs. The leg was not broken but the flesh badly lacerated and torn from the bone. Of course he had a narrow escape from death. This should be a warning to parents and children. Mrs. Stacey is making preparations to go to her husband, who is run away from justice, probably on the borders of the United States and the British Possessions Now she will be obliged to wait awhile. (T.S.R. 49. 2 P.M. 70. S.S. 60.)

May 17. Monday. This has been the warmest day of the season. The ladies came here and made ice-cream for the coming Fair and Entertainment of the Society. My part was to take care of Nellie. There was a little kitten up in the garret, too small to come down stairs by itself, so it would stand at the top of the stairs and new to Nellie, and she, anxious to play with it, but afraid to go up the flight of stairs, would stand at the foot of the stairs and say - "how-do-do-kitty?" It was really comical to see them. Nellie is fifteen and one-half months old. (T.S.R. 61. 2 P.M. 91. S.S. 80.)

May 18. Tuesday. The ladies came here again and picked over the strawberries for the Festival held this evening. These was a good attendance, and the receipts, clear of all expenses were sixty dollars This we consider remarkable considering how dull the times are financially. (T.S.R. 68. 2 P.M. 89. S.S. 74.)

May 19. Wednesday. Have received letters from Ada and Ida. Mr Cooke has been for two weeks helping Rev. Tenny at Rio Vista. The Pacific in speaking of it, calls Mr. Cooke - "Our young Apollos." I have finished putting together the quilt which I began in childhood. Mother cut out most of the squares from

1886. pieces of Grandmother's, aunts and cousins dresses. Some of the calico must be between seventy five and a hundred years old. I have enjoyed setting these squares together as they constantly reminded me of the days of my childhood. Shall and it to Redwood to be quilted. (T.S.R. 55. 2 P.M. 75. S.S. 62.)

May 22. Saturday. Still a little cloudy. Wrote to Ada. Just as I had finished, Mr. Benj! Burt, whom we have not seen for years, called with his son-in-law - Mr. Hurod of Amador City. They are on their way to take a little vacation in San Francisco. Mr. Hurod married Lilla Burt and he is the principal of the school in Amador city. Alice came over with her sister - Lily Allen - who having been lately widowed, has come to live with Alice and work for her. (T.S.R. 59. 2 P.M. 91. S.S. 74.)

May 23. Sabbath. We have had a great and sudden change in weather, which has grown cooler fifteen degrees in one day. Such changes are not common to us. Received letters from Horace and Mr. Pascoe. The letter writes that Mrs. Gov. Stanford has given $50 towards a flag for the Post of the G.A.R. in Redwood City. also an order for all the flowers they wish for Decoration day, to be cut from the Palo Alto estate. Horace writes very sad news from Nashua. Grace Locke, uncle Franklin's oldest , has become insane. She has been an invalid for years, but has had ambition to study, and has been allowed to attend the High School, and now they think she has studied so hard as to affect her reason. (T.S.R. 55. 2 P.M. 76. S.S. 64.)

May 25. Tuesday. Willie wishes to have an exhibition in his school on the last day, and something for very scholar to do, so I have been helping him select and write off pieces. Teaching school seems to wear on Willie. He is thin and weak. (T.S.R. 51. 2 P.M. 85. S.S. 67.)