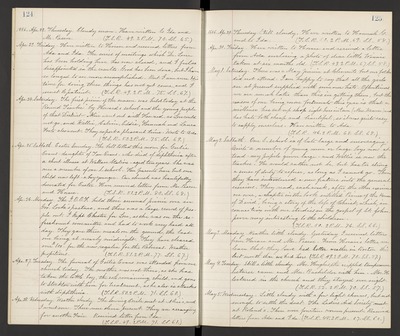 Apr. 23. Friday. Have written to Horace and received letters from Ada and Ida. The series of meetings which Dr. Lane has been holding here has now closed, and I feel so disappointed in the results. Good has been done, but I have so longed to see more accomplished. But I am sure His time for doing these things has not yet come, and I must be patient. (T.S.R. 49. 2 P.M. 75. S.S. 67.)

Apr. 24. Saturday. The first picnic of the season was held at today at the "Round Timbee" by Howard's school and the young people of that District - Alice went out with Howard, as Lou could not go, and Willie, Calvin, Eddie, Hannah and Laura Foote also went. They report a pleasant time. Wrote to Ada. (T.S.R. 50. 2 P.M. 75. S.S. 69.)

Apr. 25. Sabbath. Easter Sunday. The bell tolled this morn for Gertie Evans - daughter of Tom Evans - who died of diphtheria after a short illness at Wallace Station - aged ten years. She was once a members of our S. school. Her parents have but one child now left - a boy younger. Our church was beautifully decorated for Easter. Have received letters from Mr. Pascoe and Horace. (T.S.R. 51. 2 P.M. 80. S.S. 68.)

Apr. 26. Monday. The I.O.O.F held their annual picnic over in Geo. Locke's pasture, and there was a large crowd of people out. I kept Chester for Lou, as she was on the refreshment committee and had to work very hard all day. They gave three meals on the ground, the last one being at nearly midnight. They have cleared over $100 for the new regalia for the Rebeccas. Weather propitions. (T.S.R. 51. 2 P.M. 77. S.S. 67.)

Apr. 27. Tuesday. The funeral of Gertie Evans was attend from our church today. The mother was not there, as she has taken the little boy, the sole remaining child, and gone to Stockton with him for treatment, as he also is attacked with diphtheria. (T.S.R. 49. 2 P.M. 71. S.S. 60.)

May 1. Saturday. There was a May picnic at Clements but our folks did not attend. I am happy to say that all the girls are at present supplied with summer hats. Oftentimes we are much later than this in getting them, but the reason of our being more fortunate this year is that a milliner has set up shop right here in town (Mrs. Weaver) and has hats both cheap and beautiful, so it was quiete easy to supply ourselves. Have written to Ada. (T.S.R. 46. 2 P.M. 68. S.S. 63.)

May 2. Sabbath. Our S. school is of late large and encouraging. Quiet a number of young men or large boys now attend - my pupils grown large - and Willie is now the teacher. He would rather not be, but has too strong a sense of duty to refuse, as long as I cannot go. Then they have introduced a new feature into the general exercises. They read, each week, after the other exercises are over, a chapter in the book entitled "Prince of the House of David", being a story of the life of Christ, which in connection with our studies in the gospel of St. John, prove very interesting to the children. (T.S.R. 50. 2 P.M. 76. S.S. 66.)

May 3. Monday. Weather little cloudy. Yesterday I received letters from Horace and Mr. Pascoe. From Horace's letter we learn that they have had hotter weather in Boston this last month than we had here. (T.S.R. 49. 2 P.M 70. S.S. 57.)

May 5. Wednesday. Little cloudy with a few light showers, but not enough to settle the dust. The Ladies Aid Society meet at Roland's. There were fourteen women present. Received letters from Ada and Ida. (T.S.R. 48. 2 P.M. 67. S.S. 60.)