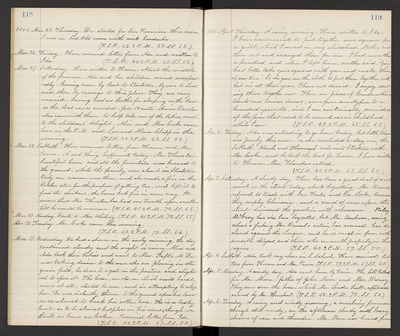 Mar. 27. Saturday. Have written to Horace. About the middle of the forenoon Ada and her children arrived unexpectedly, having come by boat to Stockton, by cars to Lodi and then by carriage to this place. They are very wearied, having had no baths for sleeping on the boat as the boat was so crowded - fare - 10 cents. Annie Barstow also came with them, to help take care of the babies, much to the childrens' delight. Alice and Mrs. Cooke came here in the P.M and Lou and Alma Clapp in the evening. (T.S.R. 42. 2 P.M. 68. S.S. 58.)

Mar. 28. Sabbath. Have received letters from Horace and Mr. Pascoe. A sad thing happened today. Mr. Thurston's beautiful house and all the furniture was burned to the ground, while the family were absent in Stockton. Only one woman was there, and she made a fire in the kitchen stove for the purpose of getting tea, and left it to feed the chickens, the house took fire in some way. It seems that Mr. Thurston has had one trouble upon another till he would be overcome. (T.S.R. 41. 2 P.M. 70. S.S. 65.)

Mar. 31. Wednesday. We had a shower in the early morning, the day continued cloudy and the night is rainy. Alice and Ada took their babies and went to Mrs. Taft's. As Dr. was talking dinner to the men who are plowing in the grain field, he drove to a gate in the pasture and alighted to open it. The horse, an old one which would hardly move at all, started to run, and in attempting to stop her, Dr. was violently thrown to the ground upon his breast so as almost to break his collar bone. He is so badly hurt as to be almost helpless in his arms, though we think no bones are broken. Received letter from Ida. (T.S.R. 51. 2 P.M. 67. S.S. 58.)

1886. Apr. 1. Thursday. A rainy morning. Have written to Ida. I have commenced to just together some squares for a quilt, which I sewed in my childhood. Mother cut them out and arranged them for me. I had more than a hundred, and when I left home, mother said, "You had better take your squares with you and awake them up some time." So she gave me the cloth to put them together with but in all these years I have not done it. I enjoy sewing them together now. There are pieces of Grandmother's Aunts and Cousins dresses, some from seventyfive to a hundred years old, and I am continually reminded of the faces that used to be around me in childhood, while I sew. (T.S.R. 49. 2 P.M. 65. S.S 60.)

Apr. 2. Friday. Ada was intending to go home today, but little Winnie was poorly this morn. so she concluded to stay over the Sabbath. Uncle and Hannah rode into Stockton with Mr. Cooke, and he took the boat for home. I have written to Horace. Mrs. Flanders called. (T.S.R. 42. 2 P.M. 63. S.S 60.)

Apr. 3. Saturday. A cloudy day. There has been a great deal of excitement on the street today about boycotting. Mr. Bruml refused to trade with Geo. Foster and Geo. Locke, because they employ Chinamen, and a crowd of men upon the street discussed the question with vehemence. Riley McGary has also been boycotted, but Mr. Ambrose, seeing what a feeling Mr. Bruml's action has aroused, has declared against the League, and he is most in favor with sensible citizens, and those who are worth property in this region. (T.S.R. 40. 2 P.M. 59. S.S 55.)

Apr. 6. Tuesday. A rainy and windy morning, a sunshiny forenoon though still windy, in the afternoon cloudy with heavy showers of rain and thunder. Mr. Moore was buried from