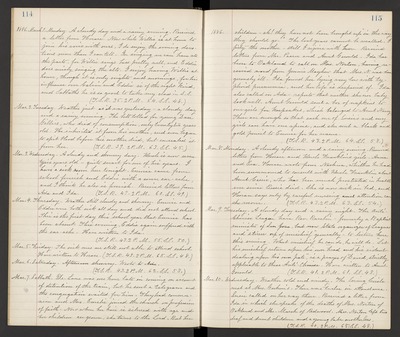 1886. March 1. Monday. A cloudy day and a rainy evening. Received a letter from Horace. Now while Willie is at home to join his voice with ours, I do enjoy the evening devotions more than I can tell. In singing we can have all the parts, for Willie sings bass pretty well, and Eddie does nicely singing the alto. I enjoy having Willie at home, though it is only nights and mornings, for his influence over Calvin and Eddie is of the right kind, and Sabbaths he is so good to take my class in S.S. (T.S.R. 35. 2 P.M. 54. S.S. 48.)

Mar. 2. Tuesday. Weather just as it was yesterday - a cloudy day and a rainy evening. The bell tolled for young Dan Gillics, who died of consumption, only twenty two years old. He inherited it from his mother, and even began to spit blood before his mother died, but concealed it from her. (T.S.R. 39. 2 P.M. 63. S.S. 45.)

Mar. 3. Wednesday. A cloudy and showery day. Uncle is now seventy-six years old - quite smart for one of his years. I have a sick room here tonight. Eunice came from school feverish and Eddie with a severe ear-ache, and I think he also is feverish. Received letters from Ada and Ida. (T.S.R. 43. 2 P.M. 60. S.S. 49.)

Mar. 4. Thursday. Weather still cloudy and showery. Eunice and Eddie were both sick all day and did not attend school. This is the first day this school year that Eunice has been absent. This evening, Eddie again suffered with the ear-ache. Have written to Ida. (T.S.R. 43. 2 P.M. 55. S.S. 50.)

Mar. 7. Sabbath. Dr. Lane was one hour late in coming on account of detention of the train, but he sent a telegram and the congregation waited for him. They had communion and Mrs. Emslie joined the church on profession of faith. Now when her hair is silvered with age and her children are grown, she turns to the Lord. But her

1886. children - ah! they have not been brought up "in the way they should go." The lost years cannot be recalled. I pity the mother - still I rejoice with her. Received letters from Mr. Pascoe and Aunt Gerould. Ida has been to Oakland to call on Mrs. Norton, having received word from Jennie Mayhew that Mrs. N. was dangerously ill. Ida found her lying very low with typhoid pneumonia, and her life is despaired of. Ida also called on Ada - reports that neither she nor baby look well. Aunt Gerould sent a box of napkins to our girls for keepsakes, which belonged to Aunt Nancy. There are enough so that each one of Susie's and my girls can have one a piece, and she sent a black and gold pencil to Eunice for her name. (T.S.R. 43. 2 P.M. 64. S.S. 53.)

Mar. 8. Monday. A cloudy afternoon and a rainy evening. Received letters from Horace and Uncle Franklin's girls - Anna and Eva. Horace wrote from Nashua, whither he had been summoned to consult with Uncle Franklin about Aunt Carrie, who has been much prostrated in health ever since Bessie died. She is now sick in bed, and Horace says only by careful nursing and attention can she recover. (T.S.R. 43. 2 P.M. 63. S.S. 54.)

Mar. 9. Tuesday. A cloudy day and a rainy night. The Anti-Chinese League have Rev. Ravelin - formerly a Baptist minister of San Jose, but now State organizer of Leagues and "stirrer up of mischief" generally - to lecture here this evening. What mischief he can do, he will do. "Let his mischief return upon his own head and his violent dealing upon his own pate", is a prayer of David, strictly applicable to these Anti-Chinese. Have written to Aunt Gerould. (T.S.R. 41. 2 P.M. 61. S.S. 43.)

Mar. 10. Wednesday. Weather cold and windy. The Sewing Circle met at Mrs. Geehan's. There were twelve in attendance. Susie called on her way there. Received a letter from Ida in which she speaks of the deaths of Mrs. Norton of Oakland and Mr. March of Redwood. Mrs. Norton left two deaf and dumb children and a young babe motherless. (T.S.R. 40. 2 P.M. 65. S.S. 48.)