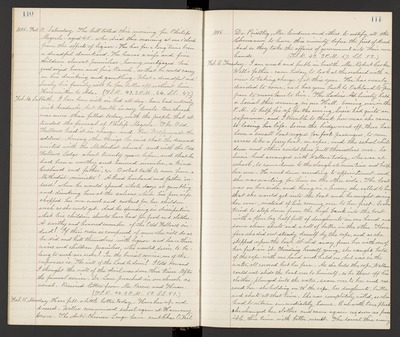 1886. Feb. 13. Saturday. The bell tolled this morning for Philip Megerle - aged 45 - who died this morning at one o'clock from the effects of liquor. He has for a long time been a dreadful drunkard. He leaves a wife and five children almost penniless, having mortgaged his good sized house and fine Ranch, so that he could carry on his drinking and gambling. What a dreadful end! Surely his family will be far better off without him. Have written to Ada. (T.S.R. 43. 2 P.M. 64. S.S. 47.)

Feb. 14. Sabbath. I have been sick in bed all day - have had not only sick headache, but trouble in my bowels. Our church was more than filled today with the people that attended the funeral of Philip Megerle. The Odd Fellows had it in charge and Rev. Wolfe made the address. Among other things he said that "the deceased united with the Methodist church and with the Odd Fellows Lodge about twenty years before, and that he had been a worthy and honored member, a kind husband and father," &.c. O what talk to come from a Methodist minister! A kind husband and father indeed! when he would spend whole days at gambling and drinking here at the saloons, while his poor wife chopped her own wood and cooked for her children such as she could get. And he spending in dissipation what his children should have had for food and clothes. A worthy and honored member of the Odd Fellows, indeed! If their order is composed of men who will do as he did and kill themselves with liquor and leave their wives and children penniless, who would desire to belong to such an order! In the burial service, one of the responses is, "The will of the Lord be done"! I told Howard I thought the will of the devil was done this time. After the funeral service, Dr. Lane preached in our church as usual. Received letters from Mr. Pascoe and Horace. (T.S.R. 44. 2 P.M. 58. S.S. 51.)

Feb. 15. Monday. Have felt a little better today. Have been up and dressed. Willie commenced school again at Harmony Grove. The Anti-Chinese League have sent Chas. O'Neil

Feb. 16. Tuesday. I am weak and feeble in health. Mr. Robert Cooke Will's father - came today to look at the orchard with a view to taking charge of it this year. He has nearly decided to come, and has gone back to Oakland to prepare to move here to live. The Ladies Aid Society held a Social this evening in our Hall. Coming over in the P.M. to help fix up for the evening, Susie had quite an experience, and I tremble to think how near she came to losing her life. Since the bridge went off, there has been a small boat rigged for foot passengers, to run across like a ferry boat, on ropes, and the school children and others could thus pull themselves over. So Susie had arranged with Wallace today, who was at school, to come down to the slough at noon time and help his over. He went down according to appointment, and, she was waiting for him on the other side. The boat was on her side, and being in a hurry she called to him that she would get into the boat and he might swing her over, instead of his coming over to her first. So she tried to step down from the high bank into the boat with a flour bag half full of doughnuts in one hand and some clean sheets and a roll of butter in the other. Therefore she did not steady herself by the rope, and as she stepped upon the boat, it slid away from her with one of her feet in it. Finding herself going, she caught hold of the rope with one hand and held on, but was in the water, all covered but her face. As she held the rope, Wallace could not slide the boat over to himself, so he threw off his clothes, plunged into the water, swam over to her and rescued her - she holding on to the rope, her doughnuts, butter and shats all that time. She was completely wetted, so she had to return immediately home. But with true black she changed her clothes and came again us soon as possible, this time with better result, The Social this evening