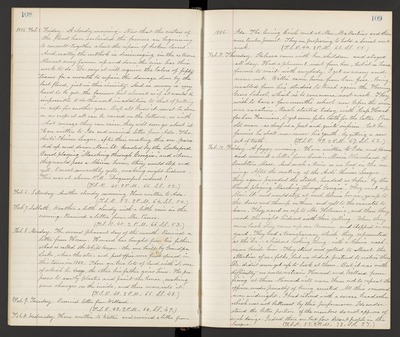 1886. Feb. 5. Friday. A cloudy morning. Now that the waters of the flood have subsided, the farmers are beginning to consult together about the repair of broken levees. And really the outlook is discouraging in the extreme. Almost every farmer up and down the river has this work to do. Dr. says it will require the labors of fifty teams for a month to repair the damage done by the last flood, just in this vicinity. And as money is very hard to be got, the farmers feel almost as if it would be impossible to do this work, in addition to that of putting in crops for another year. But all know it must be done or no crops at all can be raised on the bottoms, so with what courage they can raise, they will soon go about it. Have written to Ida and received letter from Ada. The Anti-Chinese League, after their meeting this eve, paraded up and down Main St. headed by the Lockeford Band playing "Marching through Georgia," and when they would pass a China house they would stop and yell, O most smearthly yells, making night hideous. This was at eleven P.M. Disgraceful indeed! (T.S.R. 45. 2 P.M. 66. S.S. 52.)

Feb. 8. Monday. The second pleasant day of the month. Received a letter from Horace. Howard has bought from his father what is called the White House - the one built by Grandpa Locke, where the store and post-office were first opened in this town in 1862. There are two lots of land with it, one of which he buys, the other his father gives him. He proposes to newly plaster and paint the house, making some changes on the inside, and then move into it. (T.S.R. 48. 2 P.M. 65. S.S. 48.)

Feb. 10. Wednesday. Have written to Willie and received a letter from

Feb. 11. Thursday. Rebecca came with her children and stayed all day. Had a pleasant visit from her, but it is hard for me to visit with anybody. I get so weary and worn-out. Willie came home from San Jose, being recalled from his studies to teach again the Harmony Grove School, which is to commence next week. They wish to have a four month's school now before the summer vacation. Uncle started today with "Cap Hunt" for San Francisco, to get some false teeth for the latter. Poor old man - as deaf as a post and quite inferin, but he fancies he shall now renew his youth, by getting a new set of teeth. (T.S.R. 49. 2 P.M. 67. S.S. 62.)

Feb. 12. Friday. A foggy morning. Have written to Ida and Horace and received a letter from Cousin Maria Blanchard of Brockton, Mass. And such a time as we had in the evening. After the meeting of the Anti-Chinese League, they again paraded the streets, headed as before by the Band playing "Marching through Georgia." They went up Main St. and would stop at each China house, go up to the doors and thump on them and yell to the inmates to leave. They went on up to Mr. Holman's, and there they made the night hideous with their yelling. When they came back they came up our Avenue and stopped in our yard. They had a transparency which they represented as the Dr. - a hideous looking thing - with a China washman beside him. They stood and yelled to attract the attention of our folks, but we didn't pretend to notice them Dr. didn't even get up to look at them. But it was with difficulty we could restrain Howard and Willard from firing at them. Howard will warn them not to repeat the offence under penalty of being arrested. All this occurred near midnight. I had retired with a severe headache which was not bettered by this performance. We understand the better portion of the members do not approve of such doings. Indeed, there are but few decent profile in the League. (T.S.R. 55. 2 P.M. 73. S.S. 57.)