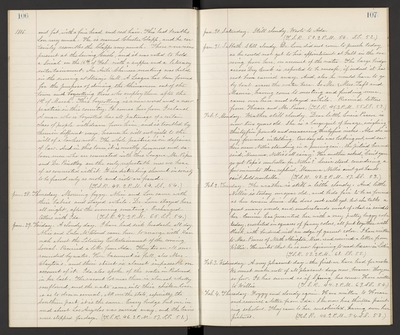 1886. and fat, with a fine head and red hair. This last troubles Lou very much. He is named Chester Clapp, and he certainly resembles the Clapps very much. These were nine present at the Sewing Circle, and it was noted to hold a Social on the 16th of Feb. with a supper and a literary entertainment. An Anti-Chinese meeting was held in the evening at Steacy's Hall. A League has been formed for the purpose of driving the Chinamen out of the town and boycotting those who employ them after the 1st of March. This boycotting is a new word and a new practice in this country. It comes here from Ireland. A man who is boycotted has all patronage of a certain class of people withdrawn from him, and is troubled by them in different ways, because he will not yield to the will of a lawless mob. The whole practice is in defiance of law. And in this town, it is mostly bummers and saloon men who are connected with this League. Mr. Piper and Dr. Priestley are the only respectable ones we hear of as connected with it. It is a disturbing element in society to be feared only as mobs and riots are feared. (T.S.R. 48. 2 P.M. 64. S.S. 54.)

Jan. 29. Friday. A cloudy day. I have had sick headache all day. Alice and Lulu McCloud came here to arrange with Hannah about the Literary Entertainment of the coming Social. Received a letter from Ada. They too are all surrounded by water. Her basement is full, also Mrs. Clayton's, and their street is almost impassable on account of it. Ida also spoke of the water in Redwood in her last. The vacant lot near them is almost wholly overflowed, and the water came into their chicken house so as to drown several. All over the state, especially the Southern part, it is the same. Every bridge but one in and about Los Angeles was carried away, and the train's were stopped for days. (T.S.R. 46. 2 P.M. 57. S.S. 51.)

Jan. 31. Sabbath. Still cloudy. Dr. Lane did not come to preach today as he could not get to his appointment at Galt in the evening from here, on account of the water. The large bridge across Dey Creek is reported to be unsafe, if indeed it has not been carried away. And, also, he would have to go by boat across the water here. So Mr. & Mrs. Taft and Mamie, having come to meeting and finding none, came over here and stayed awhile. Received letters from Horace and Mr. Pascoe. (T.S.R. 45. 2 P.M. 55. S.S. 53.)

Feb. 1. Monday. Weather still cloudy. Dear little Susie Pascoe is now two years old. She is a large girl of her age, weighing thirtyfive pounds and measuring thirtyfive inches. Also she is very forward in talking. One day she was looking out, and saw their mare Nellie standing in a pouring rain. She pitied her and said, "Mamma, Nellie's all rainy." Her mother asked, "Can't you go get Papa's umbrella for Nellie?" Susie stood considering a few minutes then replied, "Mamma Nellie aint got hands - can't hold umbrella." (T.S.R. 48. 2 P.M. 57. S.S. 53.)

Feb. 2. Tuesday. The weather is still a little cloudy. And little Nellie is today one year old, and bids fair to be as forward as her cousin Susie. She does not walk yet, but she talks a great many words, and understands most of what is said to her. Eunice has presented her with a very pretty buggy robe today, crocheted in squares of fancy colors, all put together with black, with bordered with an edge of garnet color. I have written to Mrs. Powers of North Abington, Mass. and received a letter from Willie. He writes that he is now beginning to read Cesar in Latin. (T.S.R. 53. 2 P.M. 61. S.S. 55.)

Feb. 4. Thursday. Foggy and cloudy again. Have written to Horace and received a letter from Ida. She now has thirteen painting scholars. They came to her unsolicited, having seen her pictures. (T.S.R. 44. 2 P.M. 54. S.S. 53.)