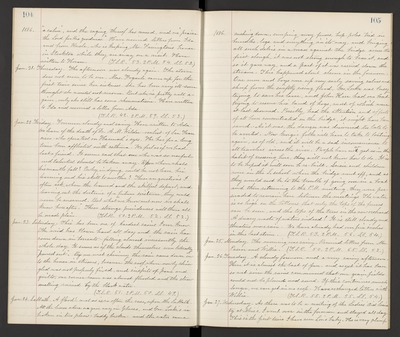 Jan. 21. Thursday. The afternoon was cloudy again. The storm does not seem to be over. Mrs. Fogarle came up for the first time since her sickness. She has been very ill-some thought she would not recover. But she is pretty well again, only she still has some rheumatism. Have written to Ida and received a letter from Ada. (T.S.R. 42. 2 P.M. 59. S.S. 53.)

Jan. 22. Friday. Forenoon cloudy and rainy. Have written to Ada. We learn of the death of Dr. A. M. Wilder - oculist - of San Francisco - who operated on Hannah's eyes. He has for a long time been afflicted with asthma. We feel as if we had lost a friend. It seems sad that one who was so useful and talented should be taken away. Upon whom shall his mantle fall? O why, in dying, could he not leave his learning and his skill to another? These are question's I often ask, when the learned and the skilful depart, and leaving out the doctrine of a future existence, they could never be answered. But what "we know not now we shall know here after." These strange providences will then all be made plain. (T.S.R. 50. 2 P.M. 52. S.S. 52.)

Jan. 23. Saturday. This has been one of hardest rains I ever knew. The wind has blown hard all day and the rain has come down in torrents - falling almost incessantly the whole day. It seems as if the clouds themselves were litually "poured out". By our west chimney the rain came down into the house in streams, because the roof, when newly shingled was not properly fixed, and inspite of pans and quills, our corner room was almost flooded and the straw malling ruined by the black water. (T.S.R. 51. 2 P.M. 50. S.S. 49.)

Jan. 24. Sabbath. A flood! - and as is so often the case, upon the Sabbath. All the lives above us gave way in places, and Geo. Locke's is broken in two places - badly broken - and the water came

1886. rushing down, sweeping away fences, hop-poles tied in bundles, logs and everything in its way, and bringing all such debris in a mass against the bridge across the first slough, it was not strong enough to bear it, and so it gave way, and a part of it was carried down the stream. This happened about eleven in the forenoon. Our men and boys were up very early saving calves and sheep from the swiftly rising flood, Geo. Locke was busy trying to save his levee, and John Kerr had our boat trying to rescue his band of hogs, most of which were at last drowned. Possibly had the attention and efforts of all been concentrated on the bridge, it might have been saved. As it was, the danger was discovered too late to be averted. Now George's folks will have to take to boating again, as of old, and it will be a sad inconvenience to all travelers across the river. People have now got so in the habit of crossing here, they will not know how to do. It is to be hoped it will soon be re-built. Susie and children were in the S. school when the bridge went off, and as they would not be to the trouble of going over in a boat and then returning to the P.M. meeting, they were persuaded to remain here between the meetings The water is so high on the bottoms that only the tops of the fences can be seen, and the tops of the trees in the new orchard. A dreary waste of waters indeed! It is still cloudy and threatens more rain. We have already had over five inches in this last storm. (T.S.R. 53. 2 P.M. 56. S.S. 54.)

Jan. 26. Tuesday. A cloudy forenoon and a very rainy afternoon. Here it is almost the last of Jan. and as yet it has been so wet since the rains commenced that our grain fields could not be plowed and sowed. If this continues much longer, we can get in no crop. Have exchanged letters with Willie. (T.S.R. 55. 2 P.M. 55. S.S. 54.)

Jan. 27. Wednesday. As there was to be a meeting of the Ladies Aid Society at Alice's, I went over in the forenoon and stayed all day. This is the first time I have seen Lou's baby. He is very plump