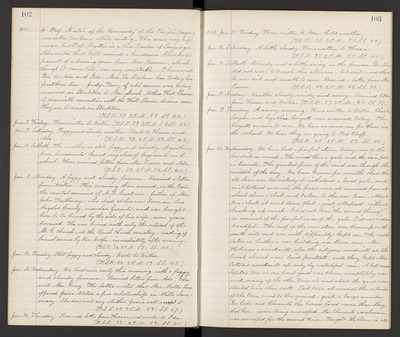 1886. to Prof. Martin of the University of the Pacific paying one dollar per hour while reciting. This seems very high wages, but Prof. Martin is a fine teacher of Languages. Ada writes that Will received a handsome Christmas present of a dressing-gown from Mrs. Nieman, which though it came late, was very acceptable. I have written to Ada and Ida. Mrs. Dr. Barbons has today her first born Son. Judge Terry of rebel renown was today married in Stockton to Mrs. Sarah Althea Hill Sharon of unenviable connection with the Hill-Sharon divorce case. They are to reside in Stockton. (T.S.R. 29. 2 P.M. 51. S.S. 44.)

Jan. 11. Monday. A foggy and cloudy forenoon. Received a letter from Willie. This morning there arrived, on the train the mortal remains of A. D. Goodwin - father of Mrs. John Tretheway - who died at his new home in Los Angelos County, near San Jacinto, and was brought here to be buried by the side of his wife, some years deceased. He was buried with only the ritual of the M. E. Church, at the Brich Church cemetery - reading of burial service by Rev. Wolfe - immediately after arriving. (T.S.R. 34. 2 P.M. 53. S.S. 45.)

Jan. 13. Wednesday. We had rain early this morning, with a foggy and cloudy forenoon. Received letters from Ada, Ida and Mrs. Gray. The latter writes that Mrs. Mills has offered Jessie Norton a free scholarship in Mills' Seminary. She does not say whether Jessie will accept it. (T.S.R. 45. 2 P.M. 53. S.S. 47.)

Jan. 20. Wednesday. We have had a fearful storm today - one of the hardest on record. The wind blew a gale and the rain fell in torrents. The greatest force of the wind was through the middle of the day. We have known for months that the old barn was too rickety to withstand a hard gale, and as it tottered so much, the horses were all removed from it about eleven o'clock and taken to the new barn. About two o'clock it went down flat - just collapsed - without breaking up much. I did not hear "the sound thereof" on account of the fearful noise of the gale. O it was indeed dreadful. The roof of the new store was blown up on the south side and was with difficulty kept on. The ventilator on Luther's new building was blown over - Mr. Holman's windmill, also the citizens' windmill at the Brick church were laid prostrate, and they kept Mrs. Cotton's windmill up only by watchful case. A tall eucalyptus tree in our front-yard was blown completely over and many of the other trees in and about the yard were started from their roots. Oak trees all around the outside of the town went to the ground - quite a large number. In Lodi and Clements the houses fared worse than they did here, some being unroofed. Mr. Clements warehouse was unroofed for the second time. Tonight the storm is all