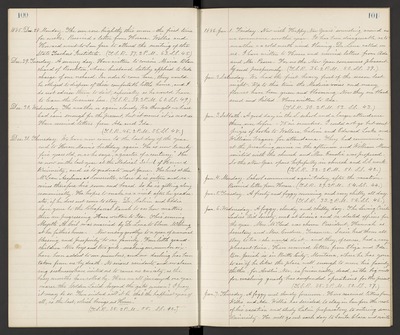 Dec. 29. Tuesday. A sunny day. Have written to cousin Maria Blanchard of Brockton, whose husband lately applied to take charge of our orchard. In order to come here, they would be obliged to dispose of their comfortable little home, and I do not advise them to don't, especially as he would have to learn the business here. (T.S.R. 38. 2 P.M. 60. S.S. 49.)

Dec. 31. Thursday. We have now come to the last day of the year and to Horace Mann's birthday again. He is now twenty five years old, or as he says, "a quarter of a century." He is now in the last year at the Medical School of Harvard University, and is to graduate next June. He lives at the McLean Asylum at Somerville, where he is intern and receives therefore his room and board. So he is getting along economically. He hopes to make us a visit after he graduates, if he does not come to stay. Dr., Calvin and Eddie have gone to the Chaparral Ranch to see how matters there are progressing. Have written to Ida. This evening Myrtle M. Coil was married by Dr. Lane to Elmer McClung at her father's house. Now we say goodbye to a year of unusual blessing and prosperity to our family. Four little grandchildren - two boys and two girls - making our number six - have been added to our numbers, and no darling has been taken from us by death. No serious accidents, and no alarming sicknesses have visited us to cause us anxiety, as the busy months have rolled by. Have we all journeyed one year nearer the Golden Land beyond the gates unseen? I pray it may be so. Then indeed will it be that "the happiest year of all, is the last, which brings us home." (T.S.R. 35. 2 P.M. 55. S.S. 42.)

1886. Jan. 1. Friday. Now with "Happy New Years" sounding around us we commence another year. It has been disagreeable as to weather - a cold north wind blowing. Dr. Lane called on us. I have written to Horace and received letters from Ada and Mr. Pascoe. For us the New Year commences pleasantly and prosperously. (T.S.R. 36. 2 P.M. 50. S.S. 39.)

Jan. 2. Saturday. We had the first heavy frost of the season last night. Up to this time the Madeira vines and many flowers have been green and blooming. Now they are blackened and killed. Have written to Ada. (T.S.R. 30. 2 P.M. 52. S.S. 43.)

Jan. 3. Sabbath. A good day in the S. school and a larger attendance than ever before - 75 in numbers. I could not go but sent prizes of books to Wallace, Calvin and Edward Locke and William Wagner for attendance. They had communion at the preaching service in the afternoon and William Moore united with the church and Mrs. Ernslie was proposed. So the New Year opens hopefully in church and S.S. work. (T.S.R. 32. 2 P.M. 51. S.S. 42.)

Jan. 6. Wednesday. A foggy, cloudy and chilly day. The Sewing Circle Ladies Aid Society, met at Susie's and re-elected officers for the year. Mrs. M'Cloud was chosen President, Hannah as Secretary and Mrs. Cudner, Treasurer. Susie had them all stay to tea - she would do it - and they, of course, had a very pleasant time. Have received letters from Eliza and Ida. Bro. Josiah is in Britte City, Montana, where he has gone to see if he likes the place well enough to move his family thither, for Austin. Nev. is financially dead, as the big mill for crushing quartz has suspended operations for this present. (T.S.R. 35. 2 P.M. 50. S.S. 37.)

Jan. 7 . Thursday. A foggy and cloudy forenoon. Have received letters from Willie and Ada. Willie has decided to stay in San Jose the rest of his vacation and study Latin preparatory to entering some University. He will go out each day to Santa Clara and write