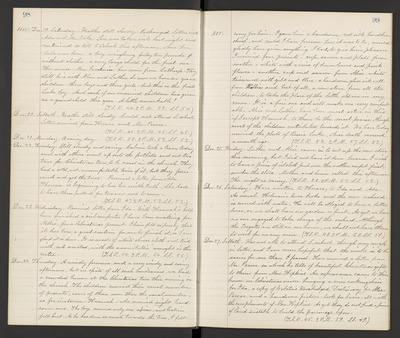 1885. Dec. 19. Saturday. Weather still cloudy. Exchanged letters with Ada and Mr. Cooke. Lou was taken sick last night and continued so till 5 o'clock this afternoon, when her babe was born - a boy - weighing fully ten pounds if without clothes - a very large child for the first one. Her nurse - Mrs. Goodwin - has come from Lathrop. They still live with Alice and Luther. So now we have six grand children - three boys and three girls - but this is the first Locke boy. And each of our married children has given us a grandchild this year. A little remarkable! (T.S.R. 44. 2 P.M. 52. S.S. 50.)

Dec. 22. Tuesday. Still cloudy and rainy. Calvin took a team today and with others went up into the foothills and cut two trees for Christmas tries to be used in the church. They had a cold, wet, uncomfortable time of it, but they persevered and got the trees. Received a letter from Ada. Theresa is beginning to lose her milk teeth. She had to have three pulled for two new ones to come. (T.S.R. 47. 2 P.M. 53. S.S. 52.)

Dec. 23. Wednesday. Received letter from Ida. With Hannah's help have finished a crib comforter I have been making for Nellie, for a Christmas present. I have felt so poorly that it has been a great exertion for me to finish it, so I am glad it is done. It is made of white cheese cloth and tied with red worsted, with the name "Nellie" wrought in the centre. (T.S.R. 54. 2 P.M. 64. S.S. 56.)

Dec. 24. Thursday. A windy forenoon and a very windy and rainy afternoon, but in spite of all such hindrances, we had a crowded house at the Christmas tree this evening in the church. The Children received their usual number of presents, some of them more than the usual number, as for instance - Hannah - who received eight handsome ones. The boys received only one a piece, and Calvin felt hurt. As he has done so much towards the trees, I felt

1885. sorry for him. I gave him a handsome red silk handkerchief, and could I have foreseen how it was to be, would gladly have given anything I had, to give him pleasure. I received four presents - cup, saucer and plate from mother - white with a vine of brown leaves and pink flower - another cup and saucer from Alice - white trimmed with gilt and blue - a handsome glass ink well from Willie and best of all, a new stove from all the children, to take the place of the little old one in my room. It is a fine one and will make me very comfortable. Alice and Luther have been most active in this, if I except Hannah, to them be the most praise, though most of the children contributed towards it. We have today received the photo of Bessie Locke, whose death occurred a month ago. (T.S.R. 53. 2 P.M. 57. S.S. 53.)

Dec. 25. Friday. Luther and Alice came in to set up the new stove this morning, but I did not have it done, because I wish to have a piece of oil cloth put over the woollen carpet first, under the stove. Mother and Susie called this afternoon. The night is rainy. (T.S.R. 50. 2 P.M. 55. S.S. 52.)

Dec. 26. Saturday. Have written to Horace, to Ida and Ada. As usual, Holman's levee broke and the new orchard is covered with water. He will be obliged to have a better levee, or we shall have no garden or fruit. As yet, we have no one engaged to take charge of the orchard. Although the Corzatts are still in our house, we shall not have them to work for us any more. (T.S.R. 48. 2 P.M. 60. S.S. 51.)

Dec. 27. Sabbath. Was not able to attend S. school, though my cough is better, and I am more hopeful that the winter is to be easier for me than I feared. Have received a letter from Mr. Pascoe in which he tells of beautiful Christmas gifts to them from Mrs. Hopkins. An express man came to their house on Christmas noon. bringing a nice rocking chair for Ida, a copy of Webster's Unabridged Dictionary for Mr. Pascoe, and a handsome picture - book for Susie - all with the compliments of Mrs. Hopkins. As yet they do not find a piece of land suitable to build the parsonage upon. (T.S.R. 45. 2 P.M. 59. S.S. 49.)