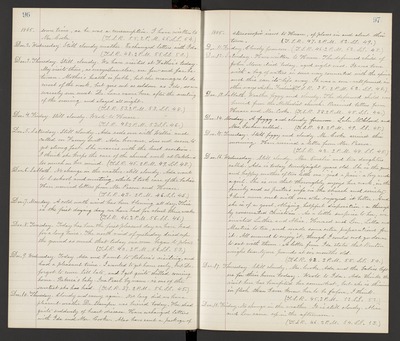 Dec. 3. Thursday. Still cloudy. We have visited at Father's today. My visits there, as everywhere else, are few and far between. Mother's health is feeble, but she manages to do most of the work, but goes out as seldom as I do, so we scarcely ever meet. Dr. Lane came here after the meeting of the evening, and stayed all night. (T.S.R. 53. 2 P.M. 53. S.S. 48.)

Dec. 5. Saturday. Still cloudy. Ada rode over with Willie and called on Fanny Swett. Ada however, does not seem to get strong fast. She wearies with the least exertion. I think she keeps the care of the church work at Oakland too much on her mind. (T.S.R. 45. 2 P.M. 49. S.S. 48.)

Dec. 10. Thursday. Cloudy and rainy again. Not long did we have pleasant weather. Dr. Stamper was buried today. He died quite suddenly of heart disease. Have exchanged letters with Ida and Mr. Cooke. Also have sent a package of

Dec. 12. Saturday. Have written to Horace. The deformed child of John Moore died today, aged eight mos. It was bone with a bag of waters in some way connected with the spine and this ran its life away. It was a son - well formed in other ways Arthur Frederick. (T.S.R. 38. 2 P.M. 62. S.S. 48.)

Dec. 16. Wednesday. Still cloudy. Mrs. Emslie and two daughters called. Ada is today twentyeight years old. She is the good and happy mother of two little one - "just a pair" - a boy and a girl. She is one that thoroughly enjoys her work, in the family and as pastor's wife in the church and society. I have never met with one who enjoyed it better. And she is of a good, obliging, helpful disposition - a thoroughly consecrated Christian. As a little surprise to her, we invited Luther and Alice, Howard and Lou, Lilla and Mertice to tea, and made some extra preparations for it. All seemed to enjoy it, though I could not go down to eat with them. A letter from Ida states that Benton weighs twentyone pounds at six months old. (T.S.R. 42. 2 P.M. 55. S.S. 50.)